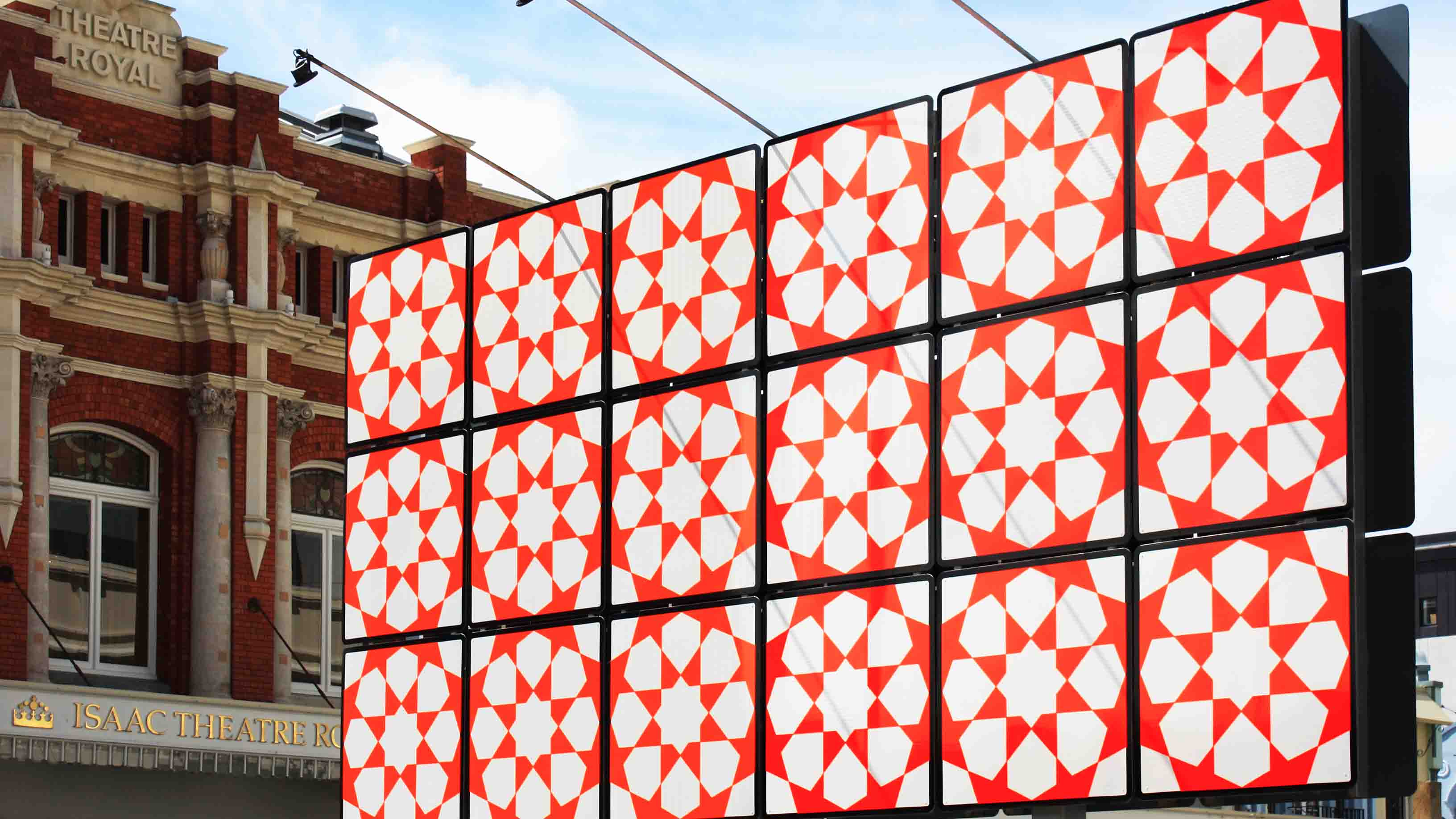 A public artwork designed to express love and solidarity following the Mosque attacks has been unveiled in the central city as part of the SCAPE Season.

The sculpture, called Under Construction – Chaos and Order (Re-imagined) 2014-2019, is by Australian contemporary artist Peter Atkins.

One half of the double-sided installation, originally installed in 2014 following the Canterbury earthquakes, has been transformed or “re-imagined” in response to the 15 March attack on two Christchurch mosques.

“The loss, confusion and feelings of anger and uncertainty people experienced after the earthquakes were clearly evident again as I watched the recent horrific events unfold on the news,” Atkins says.

“Like many people, I felt overwhelmed by what I was seeing and felt that I needed to respond.”

Located near The Press building on Gloucester St, the artwork features a different pattern on each side. One side is arranged randomly, representing ‘Chaos’ – obstacles, shards and blockages, alluding to feelings of uncertainty, confusion and frustration.

The opposite side, which has been re-imagined for SCAPE Season 2019, presents the idea of ‘Order’, and the panels are arranged systematically, as though the broken fragments of Chaos have been picked up and repositioned back in place.

The artist has used an eight-star motif that references the traditional, geometric patterns of Islamic Art dating back to the ninth century – often seen in textiles, pierced screens, tile work and stained glass.

“This new, re-imagined work is a way for me to say that the atrocious act committed against the Muslim community in Christchurch does not represent me nor my beautiful country, Australia. Under Construction – Chaos and Order (Re-imagined) is a simple gesture to express love, empathy and solidarity: to remind the community that we stand together as one,” Atkins says.

SCAPE Board Chair Michael Fulton says the original idea to transform the work had come from Atkins soon after the horrific events in March. “The motivation was to respond in some way and show his support and sorrow for what had happened.

“We were immediately touched by the gesture and thought it needed to be transformed from a digital image to an actual re-imagination.”
SCAPE consulted with the Muslim community first to see if it would be positively received, and it was.

“That the artwork can be viewed from level one of Tūranga Central Library – SCAPE’s Learning and Wellbeing Zone also seemed to be a great bonus,” Mr Fulton says.

SCAPE Season 2019 is a citywide festival running until 16 November. It features more than a dozen new public artworks linked by the SCAPE Public Art Walkway as well as numerous events.