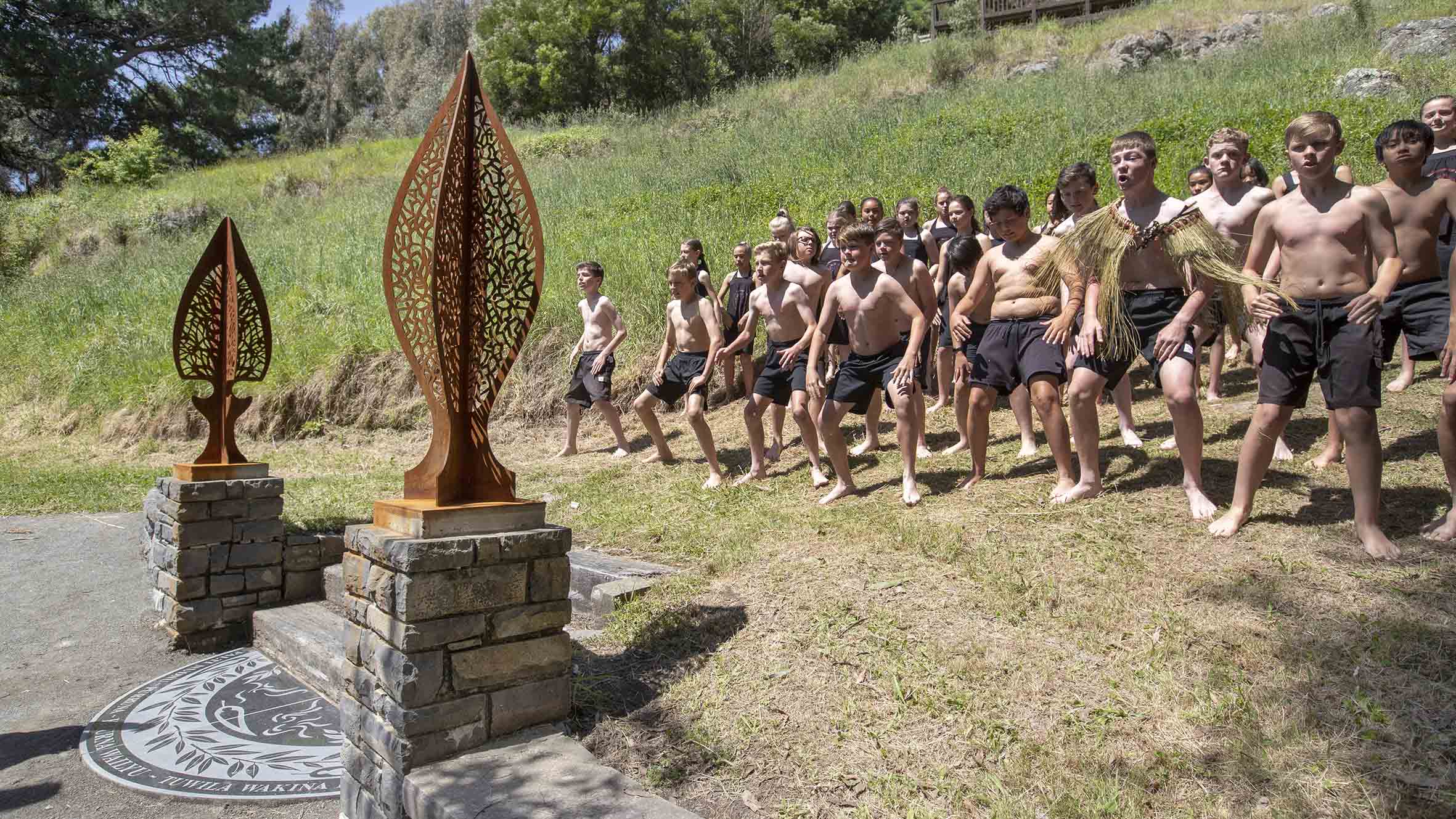 A quest to replace a stolen artwork is over with the installation of a special Adelaide Sister-City piece – titled Kaurna Wailyu (Kaurna Leaves) – in Halswell Quarry.

Created by South Australian artist Karen Genoff, Kaurna Wailyu replaces another one of her works, a 2002 bronze titled The Spheres.

The work went missing in April 2015, with only the stone plinths left standing.

A weathering steel leaf and tree and grit-etched Adelaide Hills granite artwork now sits in the same spot at the entrance to the Adelaide Garden.

“We both recognise the importance of the arts in the life and the vitality of a liveable city,” the Mayor says.

“Both cities foster creativity and innovation, and wonderful works of art can prove uplifting even in difficult times.

“We are thrilled to welcome Kaurna Wailyu – along with the Lord Mayor of Adelaide, the Right Honourable Sandy Verschoor, Karen Genoff and Kaurna elder Uncle Lewis O’Brien – to Christchurch for the unveiling of the artwork, along with past and present members of the Adelaide Sister City Committee.”

Representatives from Halswell School performed waiata at the ceremony, which was also attended by Ngāi Tūāhuriri representative Aroha Reriti-Crofts.

Adelaide lies within the traditional country of the Kaurna (pronounced “Ghana”) people.

“Our Sister City has always reached out to us and continues to provide support, with this wonderful new work further cementing our 47-year partnership,” the Mayor says.

The Christchurch City Council’s Christchurch-Adelaide Sister City Committee has commissioned the artwork, with support from the City of Adelaide.

The Lord Mayor says the work includes indigenous elements in its design, “an important reference to Adelaide’s Kaurna history and community”.

“The City of Adelaide is proud to present this artwork to the people of Christchurch as an enduring symbol of our special relationship,” Lord Mayor Verschoor says.

Committee Chairperson Dr Peter Cottrell says it has been wonderful to see all the committee’s hard work come to fruition with the delivery of Kaurna Wailyu.

“The artwork is the culmination of more than four years of interaction between Karen Genoff in Adelaide and a large group of people in Christchurch, centred on the Sister City Committee,” he says.

Genoff says she “was happy to create Kaurna Wailyu for Christchurch and to do my part as an artist to work towards healing with our own first people of the Adelaide Plains ... the Kaurna”.

“I thank Kaurna Elder Uncle Lewis O'Brien for his stories and the language which brings the work to life,” she says. “It's been a privilege to represent my city to create this work.

“The steel leaves symbolise both the living tree (life) and the skeleton leaf (passing of life), while the granite shows three Kaurna uses of the eucalyptus leaf.

“Purruna represents health, Palti Nudnu to bury the dead, and Tuwila Wakina Padni for cleansing – smoke from the eucalyptus leaves was used to purify.”

In addition to the artwork unveiling, the Lord Mayor has also attended the first graduation ceremony of the Children’s University at the Christchurch Town Hall.

The Children’s University concept, which is already established in Adelaide, has been championed by the Christchurch-Adelaide Sister City Committee following a delegation visit in 2017.