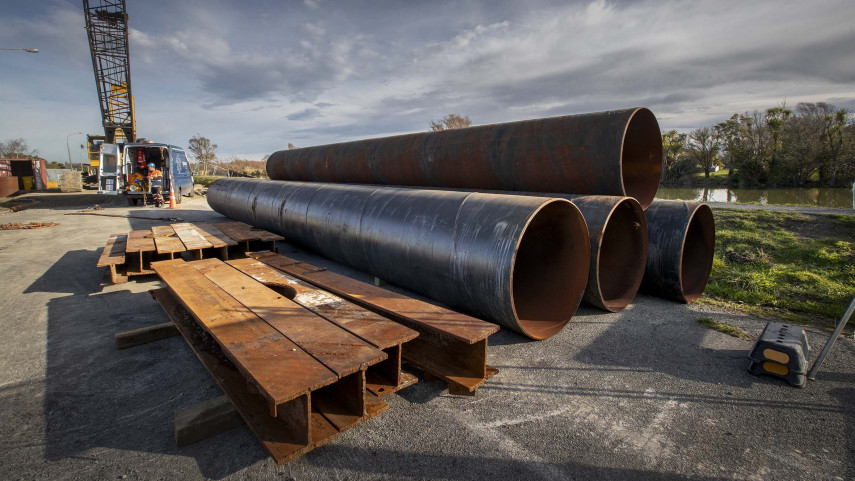 Construction on the first of three pedestrian bridges in the Ōtākaro Avon River Corridor Regeneration Area has begun two months ahead of schedule.

Abutment piling of the new pedestrian and cycle bridge at Avondale started this week as the first of two crawler cranes arrived on site. The piles will be driven 40m deep on each side of the river.

Christchurch City Council’s Head of Parks, Andrew Rutledge, says the cranes will then lift two 40m-span steel arches into place before the machines move to Medway St to install the second of the three bridges confirmed for the Ōtākaro Avon River Corridor.

“Once the arches have been lifted into place, the contractors will install the precast bridge decking panels, construct timber boardwalks and approach ramps, and complete landscaping of the area,” Mr Rutledge says.

“This new bridge at Avondale, off Hulverstone Drive, will provide a valuable connection to the future Eastern Reach wetland restoration area.”

The three bridges and a new riverside landing at Dallington, have been funded by a $13.7 million grant from the Christchurch Earthquake Appeal Trust.  The Medway Street and Snell Place Bridges reinstate a pedestrian/cycle connection across the Ōtākaro Avon River, which has been missing since the earthquakes.

All three bridges will be single-span, made from steel truss, with concrete decks and sliding, jackable abutments to mitigate lateral spread. Construction on all three bridges is expected to be completed in early 2022.

Work to develop the Dallington Landing into a riverside community gathering space and picnic area is expected to begin by early August.