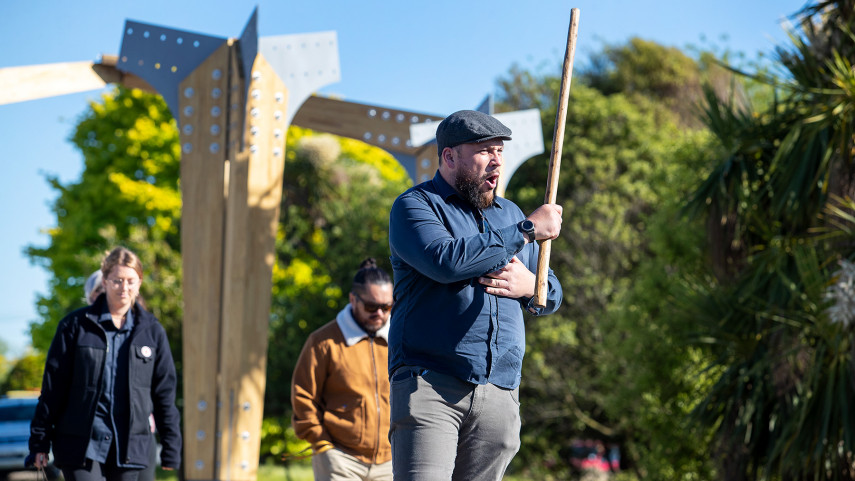 The Dallington Landing and three new bridge sites in the Ōtākaro Avon River Corridor have been blessed this morning.

The blessings were led by a mana whenua representative, signalling an important milestone as the Regeneration Area continues evolving into an urban park asset for the city.

Christchurch City Council Head of Parks, Andrew Rutledge, says work on all four sites is on track to be completed in the coming months.

“It’s exciting to see these different areas developing and to see the vision of the Regeneration Plan begin to come to life,” Mr Rutledge says.

“Work on the Dallington Landing is nearing completion and we’re hopeful that we’ll be able to pull some of the fences down before the Christmas break, so people can enjoy the parts area over the holidays.”

“The Landing won’t be quite completed by that stage, with the shelters, seats, picnic tables and final landscaping still to be finished early in the New Year, but we want people to use the summer break to connect with the river and explore the Ōtākaro Avon River Corridor,” Mr Rutledge says.

Construction of the three pedestrian bridges is also progressing well, with all three due to be completed by mid-2022.

“The Avondale bridge is in place and we’re expecting the Medway St bridge span to be lifted into position next week,” Mr Rutledge says. “Abutment piling on the Snell Place bridge is also under way.”

The Medway Street and Snell Place bridges reinstate a pedestrian/cycle connection across the Ōtākaro Avon River, which has been missing since the earthquakes.

The Avondale bridge will provide a connection to the future Eastern Reach wetland restoration area.

The Dallington Landing and three pedestrian bridges have been funded by a $13.7 million grant from the Christchurch Earthquake Appeal Trust.