A rare tropical plant that smells of rotting flesh when in full bloom is flowering at Christchurch’s Botanic Gardens. 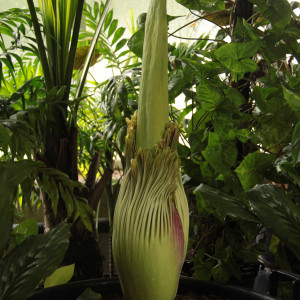 This corpse flower inside Cunningham House is about to flower for the first time in years.

Known as the corpse flower, Amorphophallus titanum is pollinated by the carrion beetle. It is native to Sumatra and only flowers for about a day once every seven to twelve years.

“When it is in full bloom, the plant gives off a strong odour - often likened to the smell of rotting meat - which is why it is known as the corpse flower,’’ says Christchurch Botanic Gardens Director Wolfgang Bopp.

“We’ve been growing the plant in the Gardens since 2008 and as far as we know this is the first time it has flowered with us.

“It’s still in the early flowering stages and it is hard to predict exactly when it will be in full bloom but we expect it to happen in the next few days. This will be a rare chance for people to see and smell the corpse flower outside of Sumatra,’’ Mr Bopp says.

The corpse flower is part of a large collection of tropical plants grown inside the warm, humid environment of Cuningham House.

People can visit Cuningham House seven days a week between 10am and 4pm daily.