Tucker: The best Christmas present ever 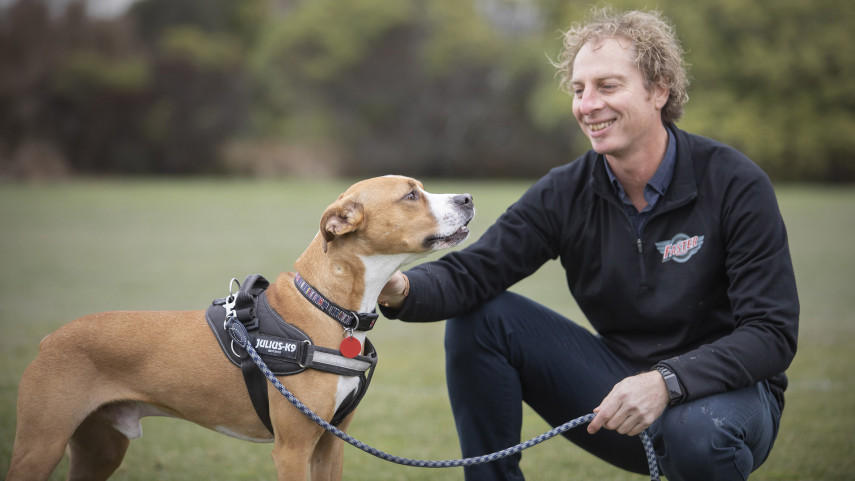 “I emailed and arranged a time to visit, filled out all the forms then went for a meet and greet and fell in love straight away.”

At that stage Tucker had been at the shelter for 12 months.

“He was a Houdini like we had never seen before,” says Dogwatch Adoption Centre Manager Kelly Burt.

“He had some deep underlying fear and behavioural concerns that he needed help with. However, we made him a promise that no matter what, we would help him find his perfect home.”

Chris says he knew straightaway Tucker was the dog for him.

“We just clicked - an instant bond formed between the two of us. I’m away a bit with sport commitments so I didn’t want to rush the process and found Kelly and the team so accommodating with me and the process of adopting one of their long termers. As I live with other dogs, we took the time to introduce all my family and dogs to Tucker one at a time.

“He has a thing about high visibility clothing and would get anxious and start barking when he saw it, which is a bit ironic as my son works in construction and I own a workwear supply business! He went nuts when my son first walked in but as soon as he took his top off he was fine. He doesn’t do it anymore, it was just being in the adoption centre environment I think, they’re on high alert because there’s so many noises and smells.

“Tucker was about 18 months old when he came to me just before Christmas.  He’s very active which is great because I like to run so we go out to Godley Head together and up onto the hills. He loves exploring new places. He’s the sweetest little guy, so smart and such a quick learner.

“He used to launch off the lead trying to get to the sheep up at Taylors Mistake. Now he puts his ears back like ‘okay dad, let’s keep running.’"

Dogwatch Sanctuary Trust works with Christchurch City Council Animal Services to help retrain dogs like Tucker so they can be adopted out.