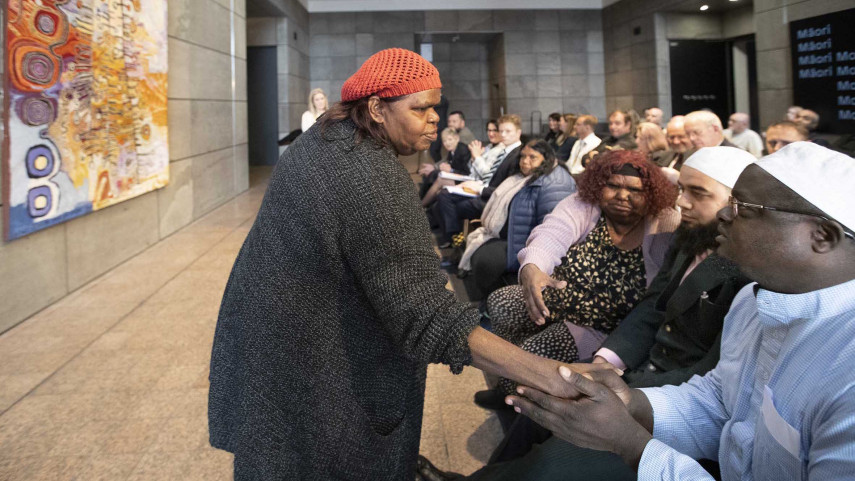 Aboriginal artists have united to create a powerful painting for the city.

The painting – featuring native Australian flowers – will go on display at the Christchurch Art Gallery before becoming part of the Tributes of Aroha exhibition.

Despite being so far away, the South Australian women had wanted to share their sorrow following the 15 March terror attacks.

The artwork was presented to Mayor Lianne Dalziel and Muslim community representatives at the Art Gallery on Tuesday during a mihi whakatau and gifting ceremony attended by South Australia Deputy Premier Vickie Chapman and three of the artists.

Aboriginal artist Nyunmiti Burton told the gathering that “we have different skin, different languages, but we are one”.

Fellow artist Yaritji Young added that their spirit “is right beside yours”.

Ms Chapman said the painting was a symbol of the state's solidarity and support.

“Adelaide and South Australia stand with you.”

She said that the painting was also a lasting symbol of the friendship between the sister cities of Adelaide and Christchurch.

The acrylic on linen painting, which measures two metres by three metres, was made by the artists from South Australia’s Anangu Pitjantjatjara Yankunytjatjara (APY) Lands as a gesture of support for the victims of the attacks and for the city.

They have created two canvases, one of which has been given to Adelaide’s Muslim Community.

The paintings depict the honey Grevillea shrub, an Australian native plant that produces long spikes of yellow and green flowers in the winter. The flowers symbolise rebirth and coming together.

A social enterprise, the collective is made up of 11 Aboriginal-owned and governed arts and culture organisations from the remote region in South Australia's north-west. Kununpa Kutju – or One Spirit – is on display in the Christchurch Art Gallery.