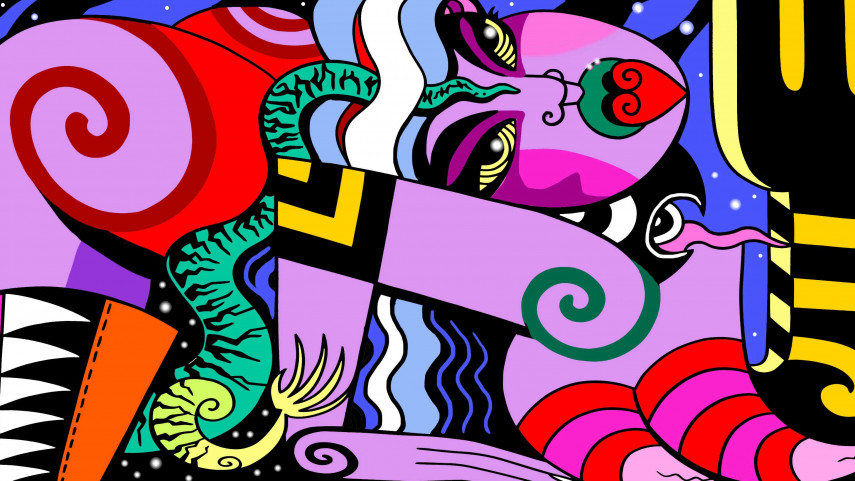 A wild new mural that celebrates atua wāhine (Māori goddesses) is about to unfold on the ‘bunker’ outside Christchurch Art Gallery Te Puna o Waiwhetū.

Kāi Tahu artist Xoë Hall is the artist behind the mural, which will adorn the three concrete sides of the ‘bunker’ which houses the stairs down to the gallery’s underground carpark.

Depending on the weather, it will take Hall at least two weeks to paint the wild, colourful mural which depicts Hine-tītama, the flashing red dawn, who becomes Hine-nui-te-pō, the atua of night and receiver of souls in the afterlife.

Mahuika, atua of fire, appears with her flaming manicure, shining a light on the past, while being a torch for the future.

The trickster Māui is shown in lizard form, referencing the time he tried to crawl through Hine-nui-te-pō to reverse the cycle of death and she awoke, slamming her thighs shut on that idea, and therefore bringing mortality to all mankind.

Hall, who has created artworks in Wellington, Porirua, Taupō and Auckland, says she is excited about creating her first large artwork in Ōtautahi Christchurch.

She says bringing a super-sized art work to life is always exciting and daunting.

“So far this mural has only been an idea on paper and on the computer screen, so to bring it to life full scale is a whole lot of physical and mental logistics to navigate that is always an enjoyable challenge. At the end I know I will feel like it’s a dream come true.’’

Hall says when it comes to painting murals, the biggest challenge is always the weather.

“You never know what you are going to get! Being blown around in the Wellington wind in a cherry picker is probably the worst, rain cancels painting entirely which is tricky when on a schedule, but a warm cloudy day is such a blessing not to be wasted.’’

When quizzed about how she hopes the public will react to the mural once it is completed, Hall says: “There is much wisdom and strength to be found within the pūrākau of our tīpuna and I like to personify that in a personal style.

“I hope that speaks to our people in an empowering and inspiring way. I hope they see themselves in it and feel connected and/or represented.’’