Behind the fences at Christ Church Cathedral 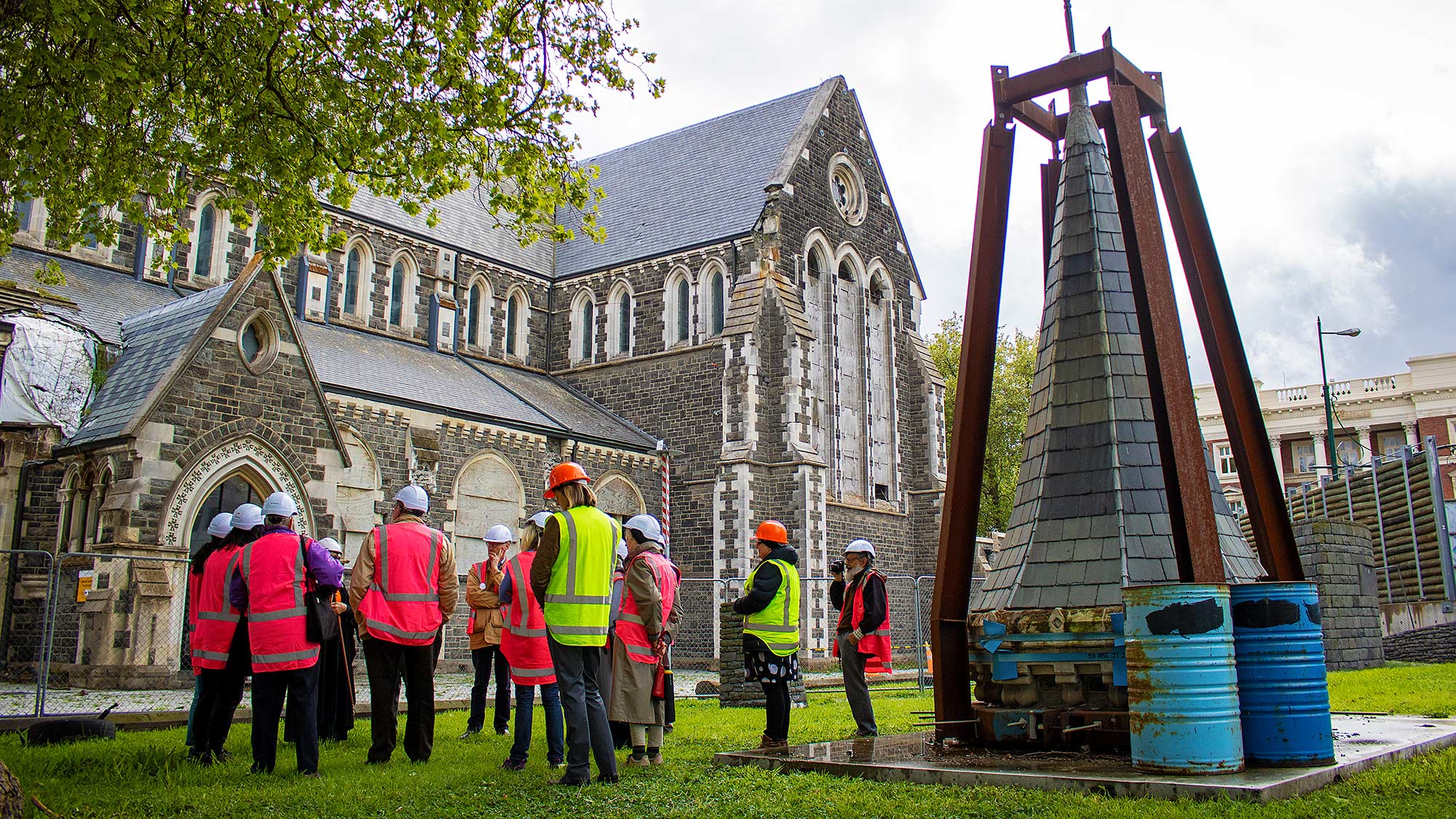 Staff inside Christ Church Cathedral heard a loud rumble and saw a thick cloud of dust when the February 2011 earthquake hit.

At first they thought it was just another aftershock, but they quickly realised it was far more serious.

Cathedral Administrator Chris Oldham described his memories of that day during Beca Christchurch Heritage Festival tours this week that allowed members of the public to step behind the fences that surround the unstable building.

Mr Oldham and Christ Church Cathedral Reinstatement Project Lead Heritage Advisor, Jenny May, both wore black “Harry Potterish” Anglican verger’s robes as they shared their first-hand knowledge of one of New Zealand’s most significant heritage buildings and gave an update on the huge reinstatement project that lies ahead.

Mr Oldham told the tour group that 22 February, 2011 was a busy day for the Christ Church Cathedral with two cruise ships in town and the Festival of Flowers underway.

Staff had become used to the bells in the tower ringing during aftershocks, but this time they were silent.

“We could see light where we shouldn’t be able to see light and we realised the tower had collapsed.”

He said the building, which officially opened in 1881, escaped the September 2010 quake with minor damage but the violent February 2011 shake caused the tower to “implode on itself”.

“The fact that no-one was in the tower [when the quake hit] is actually quite a miracle,” Mr Oldham said.

Earthquake strengthening work carried out from 2000 to 2002 probably helped prevent serious injuries or fatalities. One woman, who was an artist in residence at the Cathedral, suffered a broken arm.

Some items, such as candlesticks, choir music, prayer books and robes were retrieved from inside the Cathedral after the earthquakes, but many other heritage pieces – including a New Zealand flag that Sir Edmund Hillary took to Antarctica and historic plaques - remain inside the Cathedral, Mr Oldham said. He hopes they can be retrieved as the reinstatement project progresses.

Christ Church Cathedral Reinstatement Project Spokeswoman Annemarie Mora said this week’s tours, which were very popular, were a way to help people reconnect with the building and update them on what’s happening.

While there isn’t any visible work happening on site there is planning and design work going on behind the scenes.

The physical work to stabilise the Cathedral will begin in March or April next year, a process that’s likely to take 12 to 18 months. Once stabilised, work can begin to strengthen the Cathedral and reconfigure the interior.

By March or April next year we will have a clearer understanding of the timeframe involved for the project, but the current estimate is seven to 10 years to complete, Ms Mora said.

The project will make the Cathedral safer, more flexible and more comfortable for the future. It will have a base isolated foundation to help protect against earthquakes.

Laura Williams joined today’s tour because she wanted to find out more about the Cathedral. She works at the Distinction Hotel nearby and guests often ask her about it. “I’ve come as an investigator and because I’m a nosy person,” she said.

“I’m Christchurch born and raised so just to know what’s happening is really interesting. The Cathedral is one of those staples of Christchurch, everyone knows that it’s the place with a Cathedral at its centre.”

Gillian Creighton, who was wearing a handmade brooch depicting the Cathedral, said she is happy it is being reinstated. “It’s essential from a historical point of view.”