Bold as brass talent on show at Sparks 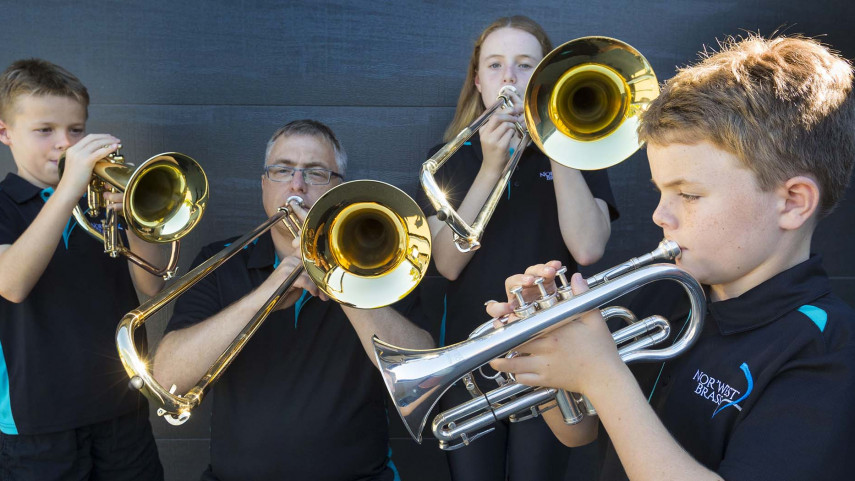 A musical local family will join the city’s top brass when they perform at the 35th anniversary Sparks concert.

Steve Croker, who plays the trombone, and three of his four children, trombone-player Kirsty, 12, and trumpet players Peter, 11, and Jonny, nine, will be playing the opening fanfare alongside the Christchurch Symphony Orchestra (CSO) at the concert this Saturday night. Steve Croker and his children (from left to right), Peter, 11, Jonny, 9, and Kirsty, 12, will be playing the opening fanfare alongside the Christchurch Symphony Orchestra at Sparks on Saturday night.

To celebrate the 35th year of Sparks, keen singers and brass players in the local community have been invited to join the CSO for the opening and closing performances in the programme.

The event, one of the biggest in the SummerTimes calendar, usually attracts a crowd of about 50,000 to 65,000 people.

The Crokers, who live in Lincoln, are four of the 41 brass players with an age range of nine to 79 who have registered to perform the Opening Fanfare of Sparks. The piece has been composed especially for the occasion by CSO principal trombonist Pablo Ruiz Henao.

An “Allcomers Choir” made up of 129 keen singers – including individuals and choir groups with an age range of eight to 80 - will join the CSO’s performance of the 1812 Overture during the fireworks finale at 9.30pm.

Mr Croker, a member of Nor’west Brass, says his children are really excited to be taking part, and it will be the first Sparks concert they’ve ever attended.

“They’re keen to get involved and excited to play along with the CSO. But I think they’re a little bit worried about how difficult the parts are going to be.”

Jonny, his youngest son, has been playing the trumpet for only a year, while Kirsty has been having lessons for over two years.

Peter used to have bass guitar lessons with Pablo Ruiz Henao as his teacher.

The youngest child in the family, Kate, seven, would love to perform as well but she’ll be watching from the audience instead with her mum.

Mr Croker says Sparks is a really popular event and he thinks the amazing atmosphere will make it “good fun” for his children. It’s also a chance for them to meet new people. “It’s a great way to make connections with other musicians.”

He’s been playing the trombone for about 40 years and loves the escapism of music and doing something different with a group of new people.

Council Events and Arts Manager Karena Finnie said the number of local people wanting to sing or play at Sparks had exceeded expectations.

"We've been absolutely delighted by the response. Sparks is one of Christchurch's most loved community events and this year is a big milestone so it's fitting to give people the chance to be involved and perform alongside their orchestra which is also celebrating its 60th year."