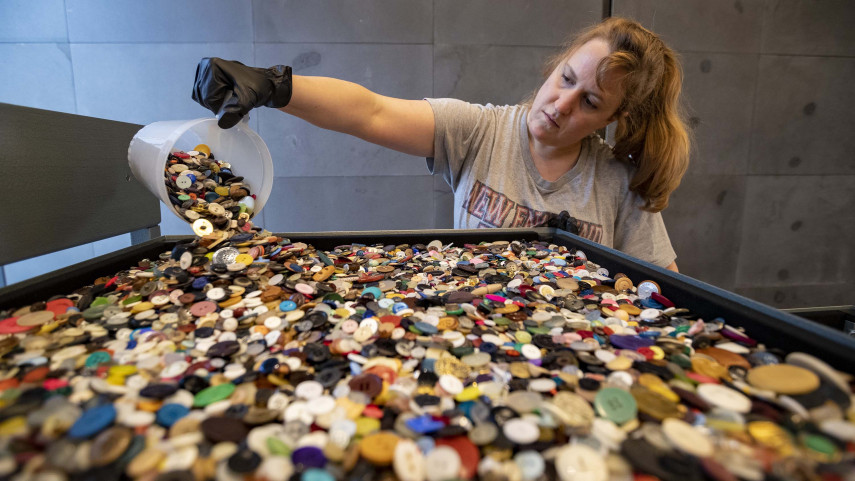 A new exhibition at Tūranga reveals the almost unspeakable cost of the Holocaust, with 1.5 million buttons representing the number of children lost. Like a child, each button is unique.

The Children’s Holocaust Memorial presents a tough but vital lesson in taking a stand against discrimination, prejudice and the violation of human rights, focusing on the importance of being an “Upstander, not a Bystander”.

Holocaust Centre of New Zealand Chief Executive Chris Harris says the memorial has a strong emotional impact, with some visitors having to step outside to “gather themselves”.

He says that the aim of the memorial is not just to educate people about the Holocaust, but to teach youngsters about the importance of calling out bullying, harassment and discrimination.

“It stirs up a multitude of emotional responses for so many people on so many different levels.”

Mr Harris will share the full story behind the memorial at Tūranga on Wednesday evening, and provide guided tours during the exhibition.

To highlight the massive loss of young lives, a small school initially gathered the buttons from around New Zealand – and the world – to help create the installation centred on a simple everyday item.

Wellington’s Moriah Jewish Day School started the collection several years ago to teach pupils about the far-reaching impact of the Holocaust, with the descendants of some family survivors living in New Zealand today.

In the mobile exhibition on show at Tūranga, the buttons sit on a range of various-sized “tables” signifying train carriages.

Most Holocaust victims were forced onto trains to travel to Nazi death camps during World War II.

Christchurch City Council Head of Libraries and Information Carolyn Robertson says the memorial exhibition is an incredibly timely reminder of the “need to step up and be counted in the face of discrimination”.

“A wave of present-day protests around the world illustrates the power of the individual in confronting prejudice,” Ms Robertson says.

“The Children’s Holocaust Memorial highlights the valuable lessons we can learn from the past and the importance of honouring those we have lost, and all the potential that will never be realised.

“We hope the memorial will connect strongly with many young Kiwis.”

Tūranga will also host an evening of “Upstander Stories” relating to an inclusive environment and diversity on Tuesday, 11 August, along with several other activities throughout the exhibition.

Award-winning children’s author Elissa Weissman will present her novel, The Length of A String, about a girl finding out about her Jewish great-grandmother’s escape from Holocaust-era Europe.

The Children’s Holocaust Memorial will be on display on Hapori/Community, Level 1 from Thursday, 23 July to Wednesday, 23 September.

To find our more, check out the Christchurch City Libraries website.