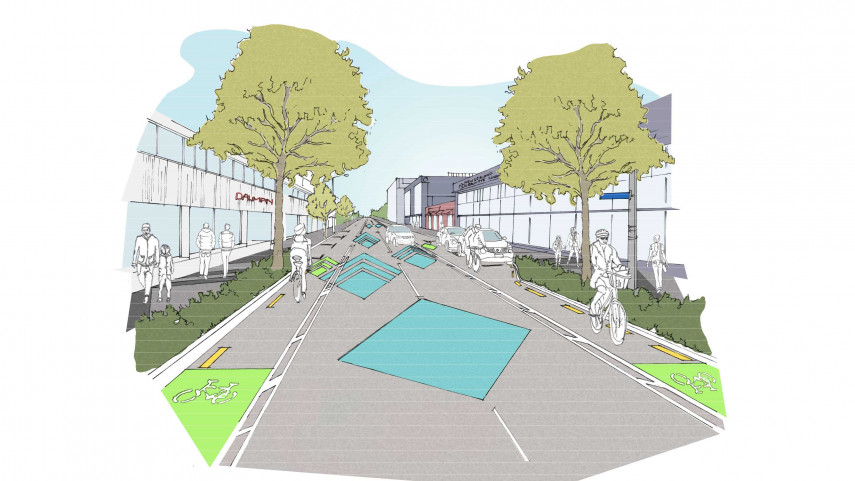 A proposed move to link the Papanui Parallel cycleway and the central city via Colombo Street is open for community feedback.

The suggested standard cycle lanes – in tandem with an extended 30kmh speed limit – will cover the section between Bealey Avenue and the Avon River Bridge.

Cyclists using the Papanui Parallel cycleway will be able to travel directly from the central city and over the Waimakariri Bridge by the end of the year.

The final link to the popular cycleway – a dedicated path between Rutland Reserve and the Christchurch Northern Corridor extension – will provide a safe route in and out of the city.

“By providing easier access, we believe more people will take the opportunity to travel by bike and make the most of the Papanui Parallel cycleway to travel in and out of the city,” Ms Ellis says.

The Papanui Parallel cycleway runs along Colombo Street before connecting with Trafalgar Street and Rutland Street. The new section runs through Rutland Reserve and then alongside the Placemakers site at the top of Cranford Street and across Winters Road before eventually connecting with the Waimakariri Bridge.

The proposal includes a reduction in on-street parking to accommodate the cycle lanes and improve cyclist safety near intersections and bus stops.

“A dedicated cycle connection along Colombo Street will encourage more people to bike into the city for work and social activities,” Ms Ellis says. “We have already noted a steady increase in cyclists navigating the city between the four avenues, and this latest link will ease access and improve safety for those travelling from the north-west.

“We can also align with the Ōtākaro Avon River Corridor Regeneration Plan at the city end while completing this proposed connection.

“We propose to drop the speed limit through to Bealey Avenue and trial temporary street markings, and patterns on the road and footpath to make our streets more welcoming.”

The suggested changes include more trees, improved pedestrian safety and the moving of bus stops.

The proposal includes fewer on-street parking spaces, with 56 spaces (from the present 74) between Bealey Avenue and Salisbury Street and 21 (35) between Salisbury Street and Kilmore Street, along with P120 parking restrictions on the east side of Colombo Street between Kilmore Street and the Avon River Bridge. Under the suggested changes, a shared path in Colombo Street will connect with the Avon River Precinct path in Cambridge Terrace.

Project team members will be available to discuss the proposal from 4.30pm to 6pm on Monday, 5 October in the red room at the Salvation Army offices at 853 Colombo Street.

People can share their views or make suggestions on the proposed changes via Have Your Say.