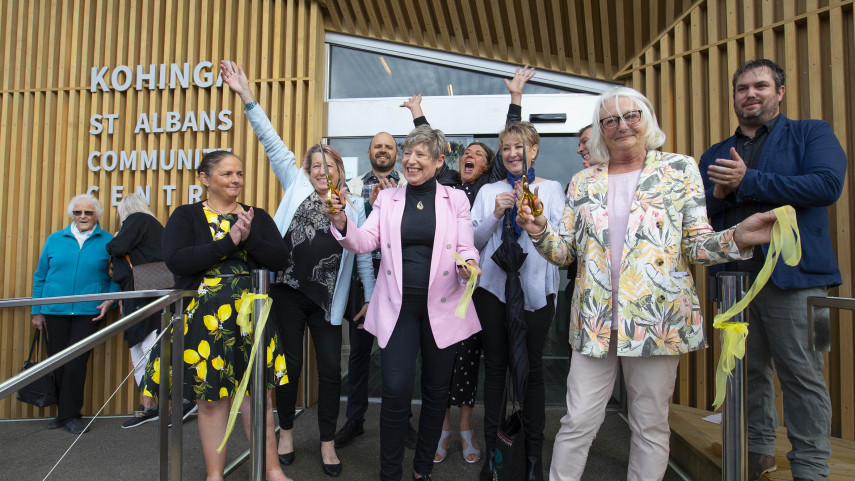 A decade on from the earthquakes, St Albans residents have a permanent new community centre to call their own.

The striking new Kohinga St Albans Community Centre was officially opened at the weekend – the first permanent facility on its Colombo Street site for a decade.

Mayor Lianne Dalziel opened the new $2.7 million community centre, situated on the block between Colombo Street and Caledonian Road, on Saturday. Along with St Albans Residents’ Association Chair Jason Harvey, she also planted a tree on the site to mark the occasion.

The new St Albans community centre has been years in the planning.

The 400 square metre building, which has a modern timber and glass facade includes a large hall and several meeting rooms for public use, a kitchen and an office.

A working party made up of Waipapa/Papanui-Innes Community Board members and representatives from groups including the St Albans Residents’ Association, Edgeware Business Association and St Albans School agreed on the community centre’s final floor plan.

Mayor Dalziel says it is wonderful to see a permanent facility on the site again after the earthquake-damaged St Albans Resource Centre was demolished in July 2011.

“When the building that used to stand on this site was taken down after the earthquakes, we were fortunate to have Lions Club International step in to provide a temporary facility but this community has been without a permanent hub since the earthquakes.

“This new building is an example of what can be achieved when various groups who know their community well work together collaboratively.

“We’re pleased to partner with the St Albans Residents’ Association, which will continue to manage the centre. This will ensure it can continue to be a well-used, and much valued part of this community for years to come.”

The original foundation stone that was salvaged when the original building on the site was demolished is featured in the community centre. The contents of a time capsule unearthed during the demolition of the former building have also been placed on the site of the new facility.

St Albans Residents’ Association Chair Jason Harvey says, “Many years have gone into the planning and construction of the new building. To see it all come together and finished is quite special. The purpose-built building is quite amazing, with spaces designed for all sorts of needs and uses.

“Community groups will really benefit from the spaces available. Amenities like this are really important for communities to have a place suitable for cultural, educational and recreational activities,” Mr Harvey says.

“We are appreciative of the Christchurch City Council and the Waipapa/Papanui-Innes Community Board for partnering with us and we look forward to taking up the management of the new centre, ensuring this great resource is well used by the community.”