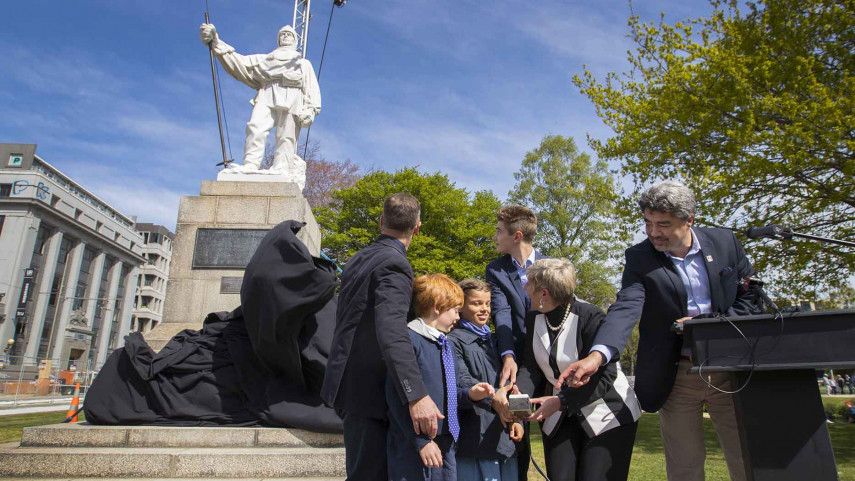 A prominent, internationally significant Christchurch statue is back on its plinth, stronger and more resilient than before.

The statue of Antarctic explorer Captain Robert Falcon Scott toppled from its Oxford Terrace plinth in the February 22, 2011, Christchurch earthquake and broke when it hit the ground. Repairing the top-heavy 2.5-tonne statue has been a technically difficult task and required an innovative approach.

Consultant engineer Grant Wilkinson, of Ruamoko Solutions, came up with the idea of inserting carbon fibre rods up into the legs and adding extra resilience with tow, carbon fibre threads each made up of 12,000 carbon fibre strands, that was woven into the marble legs.

“It’s a technique that’s never been used on a statue anywhere in the world, as far as I know,” Mr Wilkinson said. “The rods give the legs added strength and the tow makes them resilient to the type of shaking that might occur in a big earthquake.”

The method was tested on a copy of the statue’s legs, carved by sculptor Mark Whyte, in the same type of Italian Carrara marble the statue is made of.

“It was important to test the method on a mock-up because it was absolutely critical that we didn’t damage the statue further while trying to fix it,” Mr Wilkinson said. “Mark has done a great job and the repair will leave hardly any trace on the statue.”

Mayor Lianne Dalziel said the statue held a special place in the hearts of many Christchurch people.

“It commemorates Scott and the polar party who all perished on the return journey from the South Pole in 1912,” Ms Dalziel said.

“The explorers set out on their journey from Lyttelton, and their loss was keenly felt in Christchurch. The statue is symbolic of the long-established links between the city of Christchurch and the Antarctic – links that remain strong today. Added to all that, the statue was carved by Scott’s widow, Kathleen Scott, which gives it an added layer of poignancy.”

The statue was officially unveiled at a ceremony this afternoon.

“Getting this statue back up where it belongs is yet another step ahead in the city’s recovery,” Ms Dalziel said.

A documentary is being made about the repair project. View the trailer here.