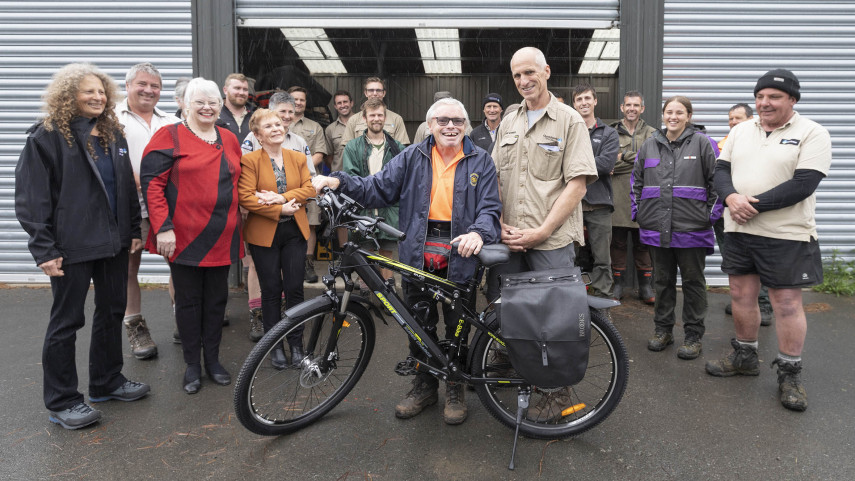 Christchurch’s park rangers have given back to one of their longest-serving volunteers by organising a fundraising campaign to buy him an electric bike so he can continue helping out at Victoria Park.

“Ian Morris has been volunteering at Victoria Park for more than 20 years and he’s an absolute legend. He has special intellectual needs but he has never let that slow him down and he’s an inspiration to our park rangers and to our other volunteers,’’ says Christchurch City Council Parks Programmes and Partnerships Manager Kate Russell.

“He loves biking and three days a week he slogs up Dyers Pass Road on his push bike to Victoria Park where he looks after the gardens around the visitor centre.

“Like all of us, Ian isn’t getting any younger and it has been getting harder for him to make the ride up to Victoria Park. He loves the routine of coming to the park and it’s really good for his wellbeing, so we decided it was time Ian went electric.

“With an e-bike, Ian can remain part of the team at Victoria Park and stay connected to the cycling community on the Port Hills. He will still be able to ride up Dyers Pass Road, but it will be gentler on his body,’’ Ms Russell says.

“The bike is Ian’s gateway to the world so having an e-bike will also make his day-to-day life easier and help him stay connected with his family.’’

Ms Russell says the park rangers set up a Give-A-Little page to raise money for the e-bike and persuaded Ecoquip NZ Limited to donate an accessory package to go with it.

A significant number of the donations received via the Give-A-Little page came from the mountain biking community who shared the campaign link on their social media networks.

The e-bike and the accessories were presented to an elated Ian at Victoria Park this afternoon.

Delighted by the generosity of the gift, Ian named the bike Black Beauty before taking it for a quick spin.

Ranger Nigel Morritt, who works closely with Ian, told him the bike was a small thank you for all his years of hard work.

"You're a very important part of our little family up here . You are an absolute legend. We just want to say thanks because you have done an awful lot of work for us and you are a very special person.''