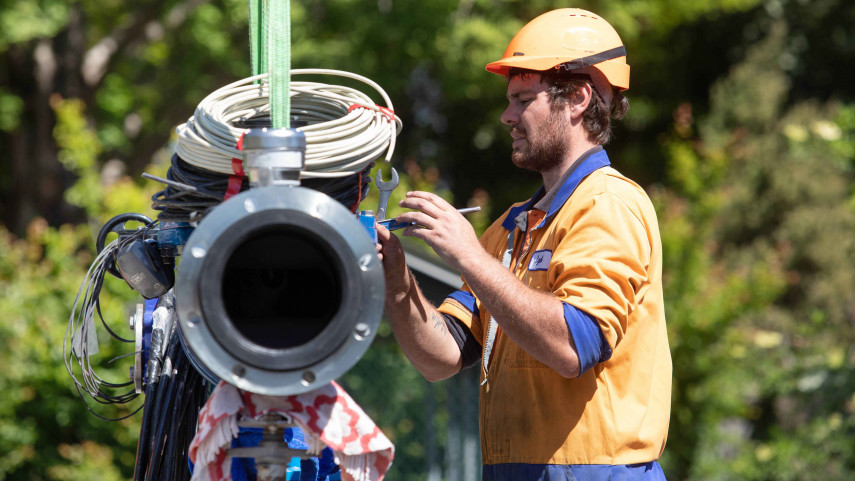 The Council has upgraded a total of 119 below-ground well heads across the city, raising them above the ground to protect the drinking-water supply from potential surface contamination.

The well heads sit on top of the city’s numerous wells and connect to the wider water supply network.

“You can see some of them when you’re moving about the city,” says Council Head of Three Waters and Waste Helen Beaumont. “They’re big, shiny blue pipes coming out of the ground with a fence around them. They’re state-of-the-art, very secure and much easier to maintain, and they’ve been designed to future-proof the city’s water supply network for many years to come.”

Ms Beaumont says the Council has taken a big step forward in bringing Christchurch’s water supply network in line with the Government's new framework for assessing contamination risks to drinking water, which was introduced in the wake of the Havelock North Inquiry.

“It’s been a massive task undertaken by staff and contractors in a relatively short timeframe, and we’ve appreciated the patience and understanding from residents as we’ve gone about working in their communities.”

The Council started upgrading its well heads in June 2018 after they were no longer deemed secure by an expert in well head security. Since then, it has also been treating the city’s drinking water with levels of chlorine to provide an extra barrier against potential contamination.

Enough well heads have been upgraded to date to supply the entire city with unchlorinated water. However, the Council has identified some areas of the city where there is a risk of contamination from backflow and poor-condition reservoirs. It needs to keep a low level of chlorine in those areas until the risks have been addressed and a review of its new water safety plan is completed.

About 20 per cent of the city is currently chlorine free, with most of the remainder being treated with a low dose at 0.2 parts per million, which is a fifth of the dose the Council first began treating with.

“In addition, there are some other parts of our water supply network that need to be upgraded before our new Water Safety Plan can be approved and the chlorine removed. Those other parts include some reservoirs and suction tanks, as well as devices to prevent the possibility of contaminated water back-flowing into the network from hazardous commercial and industrial sites.”

Ms Beaumont says the timeline for removing chlorine from the city’s drinking water is not entirely within the Council’s control.

“The timing for getting our new Water Safety Plan approved – and the chlorine removed – is uncertain, because it depends on the Drinking Water Assessor agreeing with our risk assessment in the plan, and also agreeing we’ve taken steps to make sure the water supply network is secure enough without the need for ongoing chlorine treatment.

“Our aim has always been to protect public health and demonstrate we can supply safe drinking water without the need for permanent chlorine treatment.

“The next step is to update our new Water Safety Plan and then re-submit it to the Drinking Water Assessor for final review, which we expect to do by the end of this year.”