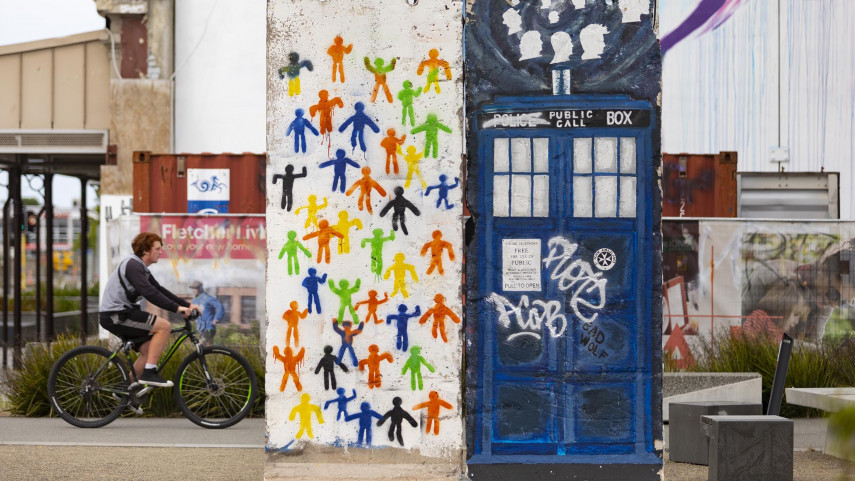 Remnants of the Berlin Wall have gone up in Christchurch in time for the anniversary month of the controversial barrier’s fall 30 years ago.

Two slabs of the dismantled structure, which divided East and West Berlin from 1961 until 1989, have been installed side-by-side at the Cashel St end of Rauora Park in central Christchurch as a monument to the wall coming down.

Council Manager of Events and Arts Lucy Blackmore says the segments are symbolic of freedom and unity which are important themes for Christchurch.

“It’s exciting for this monument to be in place to mark the 30th anniversary of the fall of the Berlin Wall in November, 1989. It was a momentous time in history and it’s wonderful to have this physical reminder of what was a peaceful transition towards greater inclusiveness.

“This monument will resonate with local people and it will provide a focal point for a new public space in the central city.”

One section of the wall was painted in Germany in 2014 or 2015 by a Berlin artist to show the tardis from television series Doctor Who, and the other was painted with human figures by a group of Berlin-based students with learning disabilities.

Both segments will be renewed over the next year with fresh artwork by local artists. This will be facilitated by Fiksate Studio and Gallery, which specialises in street and contemporary urban art.

The commissions will specify that the artworks should be a memorial to the wall coming down, the peaceful overcoming of boundaries between people, and the hope for a better society.

The painted slabs are 3.6 metres tall and weigh four tonnes each. They were gifted to Christchurch in 2016 by German construction firm EMP Beratungsgesellschaft mbH, which had the job of dismantling the controversial barrier, and they arrived here in 2017.

The arrangement was brokered by Ministry of Culture and Heritage staff with the assistance of SCAPE Public Art and Southbase Construction.

The wall pieces have been installed in a way that means they can be relocated in the future.