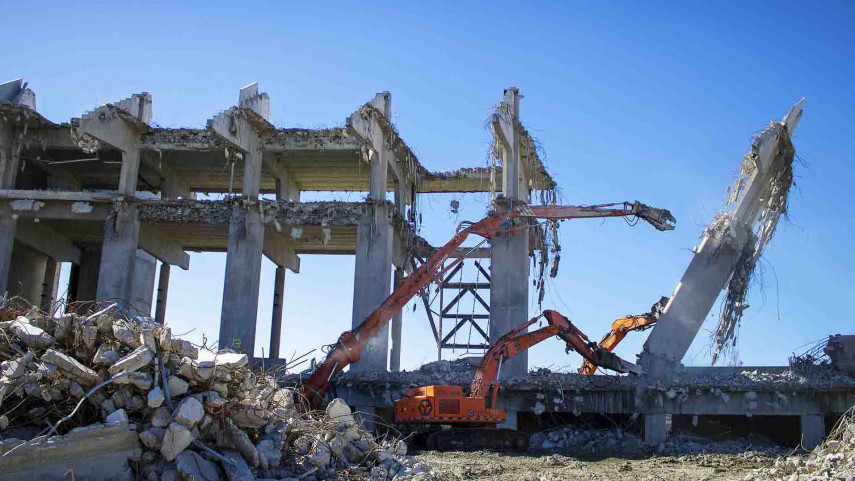 A familiar sight on the city’s skyline, Lancaster Park stadium, is almost down.

The deconstruction of the earthquake-damaged stadium is due to be completed in December this year.  Only some of the concrete frames in the two remaining stands – the Paul Kelly and Deans stands – are now left.

Project Director Lee Butcher says the stands are being broken down into sections. “We call these frames. The frames are the main structural elements of the stands and very tricky to demolish in position so they are toppled to the ground where they can be further broken down, and the steel extracted.

“We’ve been focusing on reducing the weight of each section of the stand and making the structure as light as possible before the main columns can then come down. We also know that trying to break these frames up when they’re at their normal height is noisy and dusty. Getting them down as soon as possible gives us a better opportunity to reduce any issues,” he says.

More than 3500 tonnes of steel has been salvaged and more than 30,000 tonnes of concrete has so far been transported to a private development in Rangiora for use in land remediation. All the demolition material will be removed from the site by January next year.

Once the stadium is down, the park is set to get a new lease of life as a community sports and recreation area.

A spatial plan for the redevelopment of Lancaster Park has been developed in conjunction with sporting and community groups and was released in July. A recommendation to adopt the plan will be considered at the Council meeting on Thursday 12 September.

The spatial plan includes sports fields for winter sporting codes such as rugby and football, and cricket grounds for summer use.  A generous amount of informal, public open space is included in the spatial plan, as well as landscaped areas that reflect on the rich sporting and community history of the park.

Head of Parks Andrew Rutledge says many Cantabrians have a strong connection to Lancaster Park and are obviously sad to see it come down. “The park certainly holds a very special place in many Cantabrians’ hearts and it will take a while to get used to not having this familiar landmark in our city.

“Our aim is to get the park open to the public as soon as we can so the first stage of the redevelopment will be establishing a publicly accessible green space that can accommodate community sport, and casual recreational use,” he says.