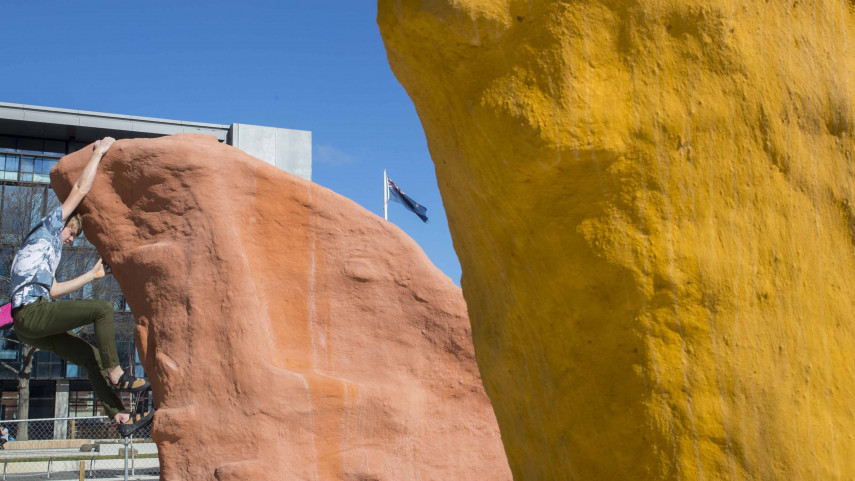 Life-like boulders up to three metres high will offer young people the chance to have an urban climbing adventure in the heart of Christchurch.

The artificial climbing boulders - dubbed Up, Up, Up! - have been installed in the laneway behind the central city Bus Interchange as part of the Transitional City programme run by Christchurch City Council.

They are primarily for young people to enjoy and were designed by sport-climbing champion Peter Taw. Christchurch City Council Head of Urban Design, Urban Regeneration & Heritage, Carolyn Ingles, says the boulders are designed to provide a safe and easily accessible way for people to try their hand at climbing without the need for ropes, harnesses or other climbing equipment.

"Up, Up, Up! provides a pocket of fun in a construction-dominated environment. We want young people to interact with the central city and providing activities like this encourages them to explore and get to know developing areas,'' Ms Ingles says.

The Council has worked with Youth Voice Canterbury, a network of young people and youth participation groups, on the development of Up, Up, Up!

Youth Voice Canterbury Co-Chair Tayla Reece, 22, says it is a “super cool idea’’ and will give young people somewhere fun to hang out and something to do while they wait for their bus.

“It means a lot to see the city take young people into account, especially since we haven’t really had the chance to thrive, or really be in the city much until now,’’ says Tei Driver, a former Youth MP for Christchurch.

Up, Up, Up! will remain in the laneway behind the Bus Interchange for at least three months. It will eventually be moved to a suitable long-term location in the city.

Boulders in the Botanic Gardens

Kids visiting the Botanic Gardens also now have two hefty new climbing boulders to clamber over, thanks to donations from the 2015 Botanic D’Lights event.

“We are trying to develop a children’s garden that is more about natural play, rather than the more traditional playground equipment, so these boulders are an excellent addition. They encourage kids to play and explore in nature, in a safe environment.

“The boulders are an amazing asset for the gardens and we know they’ll be loved by many little children over the coming years. With spring here, the gardens are looking quite spectacular with the daffodils and blossoms due in full bloom shortly, so it’s an excellent time to bring the kids down to the playground and reconnect with nature after a winter spent keeping warm indoors.” Kids explore the new boulders at the Botanic Gardens

The Botanic D’Lights event in 2015 raised almost $30,000 from gold coin donations which has gone towards the climbing boulders and playground under surfacing. This year's event raised almost $45,000 which would also be put towards developing the children’s area.

“These boulders were made locally, which is great, and we’ll be looking to do something equally exciting with the money raised from this year’s Botanic D’Lights. It’s lovely to see Christchurch people giving generously for a Botanic Garden’s event, and then enjoying the results of those donations,'' says Mr Nottingham.

The two boulders are of differing sizes to allow one area for smaller children to climb, or for parents to sit while children climb.