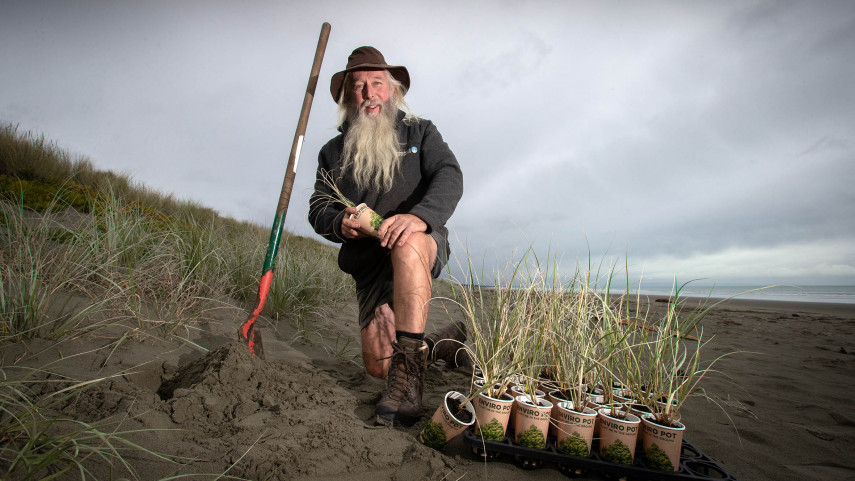 His passion for the space between land and sea is huge, he enjoys the outdoors and he's lived on the coast his whole life.

For the past quarter century the Christchurch City Council Park Ranger has been nurturing the coastal dune network that runs from Taylors Mistake to Spencerville.

That dedication recently earned him the Pingao and Tohera Trophy from the New Zealand Coastal Restoration Trust. The trophy recognises the exceptional contributions of an individual to coastal restoration

“I’m still a bit blown away by that,” he says. “I’ve seen this award given to people and I wouldn’t put myself in with them.”

His work has focused on planting sand-binding species like spinifex and pingao which help catch and hold windblown sand, building the natural dune barriers

Spinifex is his magic weapon. Growing on the lower slopes of dunes this sand-binding grass spreads towards the sea and it’s only when waves hit it constantly that it stops advancing. 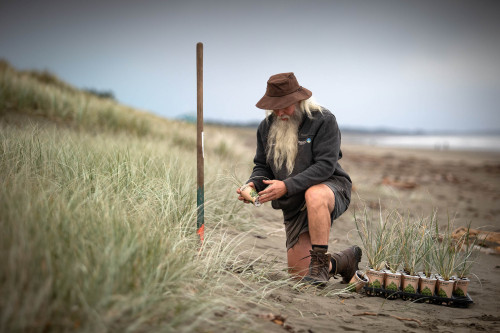 “When I first started this coastal restoration project, I’d be lucky if I could get my hands on 1500 spinifex plants. We’ve got 25km of sandy coastline and I barely had enough to cover 50m!

“So I planted them at Taylors Mistake and Sumner beach because it likes a warmer climate and we used that as a nursery. Last year we put 20,000 plants in, just from Waimairi to New Brighton.

“I still need more. This is a vulnerable part of our beach because a lot of it is only 50m to 60m wide and it was a 1km wide dune system, if we grow more dune seaward – it will take the impact when we do have major weather events.

“That’s where the spinifex kicks in. It’s growing right at the toe of the dune, it wants to march towards the sea, it’s going to widen our dunes and it can handle the impact of our dynamic coast

“It can get smashed but the runners hang down, then they capture sand and the process starts again. So we’ve got a chance for the dune to not only get some girth but it’s going to get to a point where it’ll be able to repair itself when we do have high impact events.”

He’s well supported in his work by local community groups and volunteer plantings, and he says the public are pretty good about keeping off the dunes.

It’s when a whole lot of spinifex gets washed away in a storm that he has to get philosophical. “It’s gut-wrenching. But then you have to say to yourself – it took the plants but it didn’t touch the sand we’ve got in the bank.

“This is a dynamic coastline, it’s changing all the time. It can be flat and calm. It can be rough as guts. From seaweed to driftwood to birds to the actual dunes changing - and to be part of that is great.”