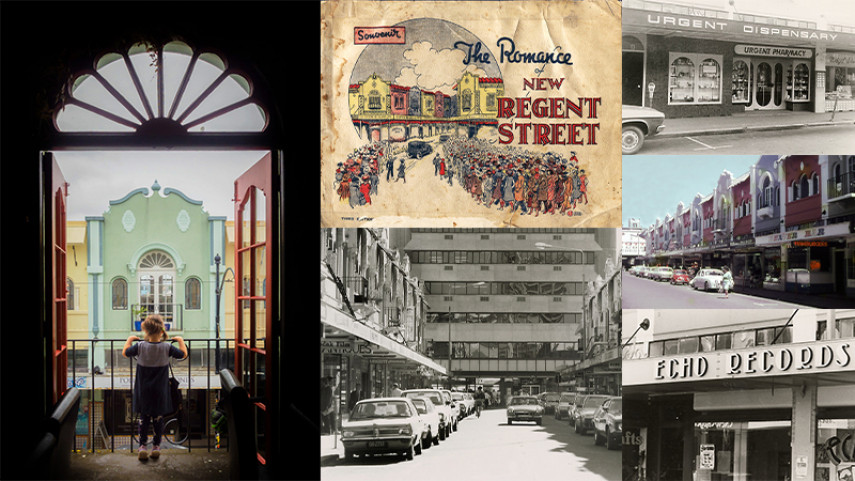 Female-owned businesses, a chequered criminal history, circuses, and a company that offered miraculous cures to arthritis – the 90 year history of New Regent Street is anything but boring.

Before it was turned into the street we’re familiar with now, the area was once an open field known as the Circus Paddock and was regularly used for touring circuses which came to Christchurch.

From there, it became a skating rink, a boot factory, back to a skating rink, taxi stand, the city’s first picture theatre known as the Colosseum and a used car showroom.

But it wasn’t until 1922 when a City Councillor called George Gould put the idea forward that it should be redeveloped into a shopping street.

The shops in 1932 were slightly different to the businesses down there today.

Going against stereotypes there were a number of women running businesses when the street first opened.

Amelia Shaw ran the fishmongers at number 9 New Regent Street while her husband was serving seven years behind bars.

Two single women, Aileen Agnes O’Donel who was from Bengal in India and Wellingtonian Gwendoline Alice Aldred were the propriotoresses of the Kandy Kitchen at number 34.

One of the street’s most notorious characters was Madam Thora Galli, a well-known hair and skin specialist.

Thora Galli was probably a pseudonym for Arabella Ann Tate, born in Dunedin in 1884 and her third marriage was to Leon Clement Galli, an Italian born 'Electro, Magneto and Therapic Expert' of the Salus Pad Company on New Regent Street.

The jeweller at number 4, Thomas Hornsby, had his shop robbed in a late night smash and grab in June 1932.

He left his shop at 11.30pm and forgot to take the diamond rings out of the window display as he did every night.

A thief wrapped a stone in a sock, smashed the window and made off with two diamond rings and five watches.

But this wasn’t Thomas’s only brush with the law.

A month later he was charged for buying alluvial gold without a licence and after that, appears in the newspaper several more times for similar dealings.

By 1934 he was charged with receiving three diamond rings valued at £30 (about $4000 now) from a young man by the apt name of Ronald Dempsy Crook, stolen from Henrietta Christina Murphy in Fendalton.

During the trial, Crook alleged that Thomas was his go-to man to sell stolen goods to, and that Thomas claimed ‘the police were no friends of his’.

Thomas pleaded not guilty and was acquitted, and he carried on in the jewellery business for decades.

A husband and wife, Harry and Amelia Bensen, ran their shops side by side at number 30 and 32.

Amelia’s drapery business, Junette, was a shop for exclusive Ladies' Wear Dainty Trousseaux made to order’, and lasted until at least the 1940s.

But Harry’s time on New Regent Street was not so successful.

Harry claimed insurance on £479 of stock but the coroner, after a thorough investigation, was convinced that the value of stock lost did not exceed £100 and that the "valuation for insurance purposes had been grossly exaggerated.

At the time, Jacobs was in financial difficulties.

There is no direct evidence of the cause of the fire, but the circumstances are highly suspicious.

A girl looks out over the balcony of a cafe in New Regent Street while waiting for lunch. Entry in the 2021 Christchurch Photo Hunt by Wei Li Jiang / CC BY-NC-SA 4.0