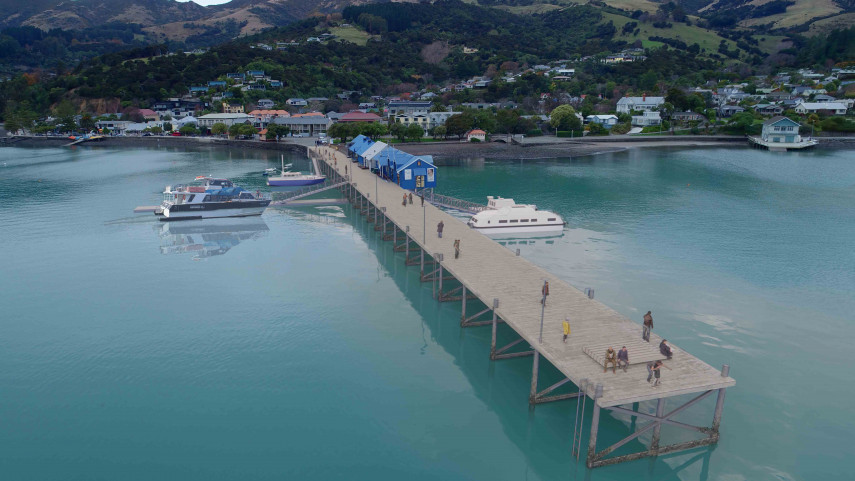 A concept design to replace the 134-year-old Akaroa Wharf will be presented to Te Pātaka o Rākaihautū Banks Peninsula Community Board on Monday 4 April.

The concept design, which the public and stakeholders were consulted on in January, will see the wharf rebuilt in the same location and of the same length as the existing wharf, (155m) with concrete piles and structure and timber decking.

Its deck would be raised approximately 0.60m from the present height to account for sea level rise and the width increased from 7.3m to 8m, whilst an additional pontoon structure will bring the total number to three.

Work on a replacement wharf has been underway since a structural assessment of the iconic landmark in late 2018 found it was reaching the end of its viable life and it was no longer  economical to keep repairing and maintaining it.

Christchurch City Council Head of Parks Andrew Rutledge says the finalised concept design has been developed following a consultation process and its completion will provide certainty for commercial operators, building owners and the public.

“This is the result of extensive discussion with the community and stakeholders about what they want to see in the new structure. It has been a three year process and I know that those involved will be keen to get the next stages get underway.

“Providing the plan is approved, detailed design work can follow on. This will include considering the reuse of existing wharf materials for elements such as seating. We will also be continuing to work with commercial operators on the wharf infrastructure and pontoon location.”

It is proposed that the wharf would continue to provide access to fuel and future provision for electrical charging is being considered.

Council staff are working with commercial wharf users on how they can continue to operate during the replacement works.

The Board will consider the design at its meeting on Monday 4 April.

Read the report on the Akaroa Wharf replacement.