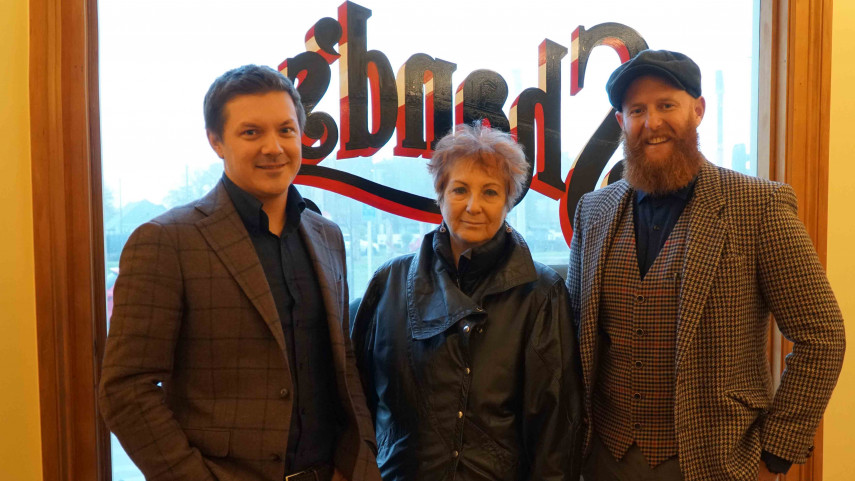 An authentic Irish pub named after a colourful Irishman will take up residence in one of Christchurch’s smallest heritage buildings – Shand's Emporium.

Inkster Company, the owner of OGB, The Parlour and Austin Club, has signed a lease with the Christchurch Heritage Trust to refurbish Shand’s Emporium and the Trinity Congregational Church, on the corner of Worcester and Manchester Streets.

The former Trinity Congregational Church, designed by Benjamin Woolfield Mountfort and opened in 1875, is the oldest masonry structure in the central city. Shand’s was built in 1860 by Liverpool merchant John Shand and is the last surviving colonial commercial building in Christchurch’s central business district.  Both buildings have Category 1 heritage listings.

Trinity Church and Shand’s Emporium were only weeks away from demolition when the Christchurch Heritage Trust purchased them in 2013 and 2015, respectively. Shand’s Emporium, which was purchased for $1, was relocated from Hereford Street to its current site in 2015.

“The two buildings are a tribute to their strong and indomitable character and a reminder to us of their roles as a portal to the past,” says Trust Chair Dame Anna Crighton.

A community loan of $1.2 million from Christchurch City Council has been essential for finishing the restoration.

“Before this loan, we were in a conundrum. We were unable to get a tenant without the restoration finished, but didn’t have the funds to finish the job,” says Dame Anna.

“We are honoured with the confidence the Council has placed in the Trust and operator to deliver an exceptional outcome for the city,” says Dame Anna.

“It shows locals and visitors the pride our city has in its history, and how important it is to see our heritage adding to the vibrancy of the city while being commercially sustainable.”

Trustee James Stringer says they have been working with Mr Inkster for over a year to develop his vision for this iconic heritage corner of the city.

“This new offering will be a place that celebrates these remarkable structures, provides a glimpse of the original craftsmanship this city was built on and will ensure we can continue to enjoy these iconic buildings well into the future,’’ Mr Stringer says.

Christchurch Mayor Lianne Dalziel is thrilled the future of the heritage buildings has been secured.

“When we invest in heritage on behalf of the city, we know that it is the future use which is often the most challenging aspect of making the funding work. I love these buildings and have many happy memories of both.

“I am absolutely thrilled. As a city we have seen a high level of support for heritage, particularly in the wake of all that we have lost and I know this news will be very well received,’’ Mayor Dalziel says.

Paddy McNaughton’s is named after Mr Inkster’s two business partners Andrew and Richard Norton’s great, great, great, great, grandfather Patrick, who was caught stealing an orange in Ireland and sent to Australia on a prison ship in 1810. In 1830 he escaped on a ship to New Zealand.

“It will be an intimate old school pub, with timber floors, antiques and beer on tap,” says Mr Inkster, who will take possession of the buildings on 1 August and is hoping to have Paddy McNaughton’s open by October at the latest.