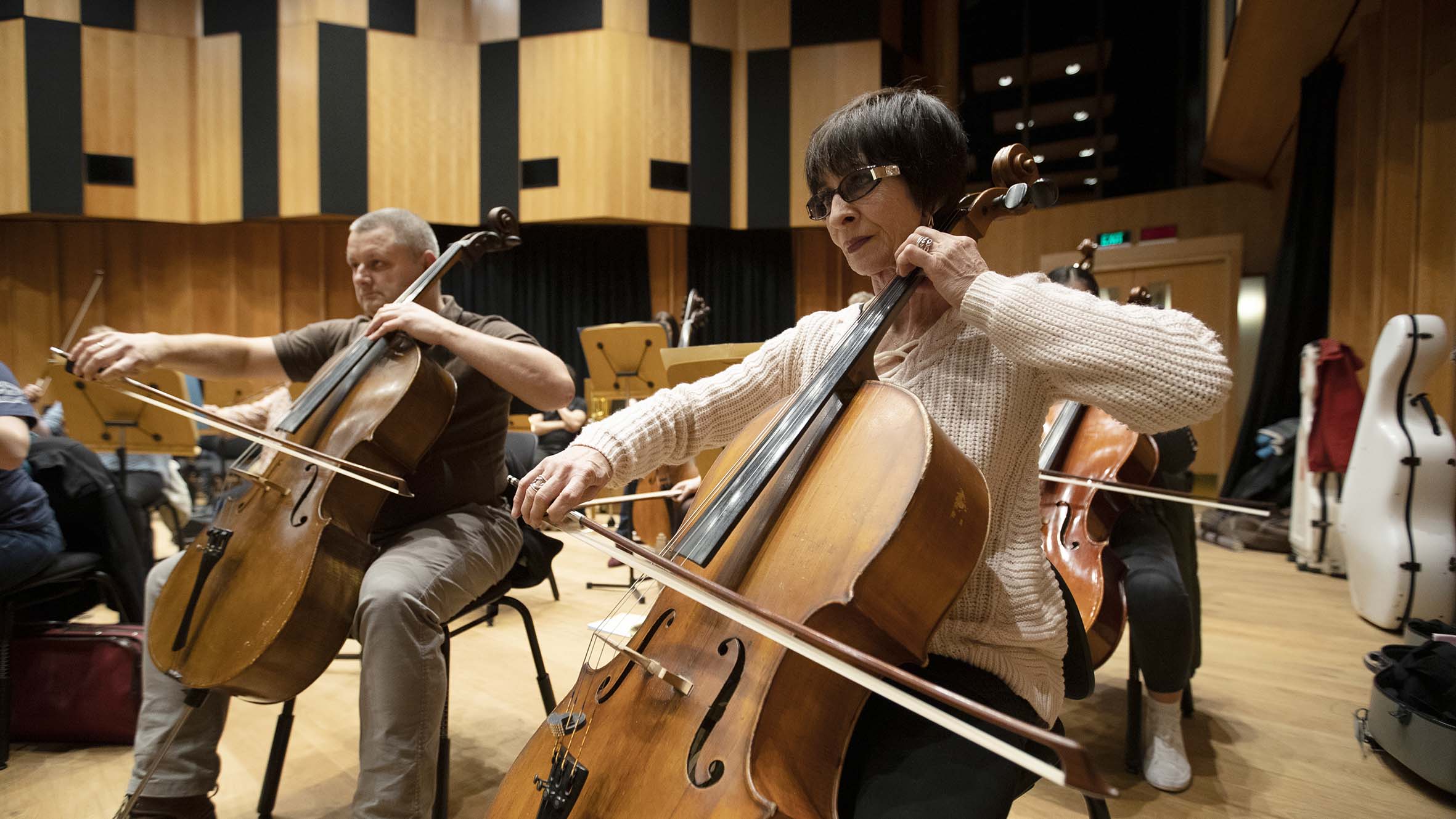 The CSO Centre, designed by Warren and Mahoney and opening today, is the orchestra’s first permanent, dedicated home since it was established more than 60 years ago. It’s also the first time it has been the Orchestra in Residence at the Christchurch Town Hall.

The Centre is on the site of the former Cambridge block in the Town Hall, which was earthquake damaged and had to be demolished.

The new three-storey building, which connects into all levels of the Town Hall, will house the orchestra’s rehearsal rooms, known as the Ron Ball Studio, administration offices, the Rodney Eastgate Music Library and a Players’ Lounge.

However, performances will continue to be held in the Douglas Lilburn Auditorium in the Town Hall.

Orchestra staff have already moved into the new building and rehearsals began in the Ron Ball Studio earlier this week.

CSO Chief Executive Gretchen La Roche says it’s exciting to be back in the city centre in a place that has been so significant for music and the performing arts in Christchurch.

“We’re looking forward to welcoming people to the CSO Centre and continuing to contribute to the flourishing local arts scene. It is a privilege to be based in such a special building and we are grateful for all of the support we’ve received to make this a reality.”

The orchestra has an active community engagement programme that connects with more than 12,000 Cantabrians each year and the CSO Centre will provide some great opportunities to expand this work even further, Ms La Roche says.

Alistair Pearson, Christchurch City Council’s Manager of Capital Delivery Major Facilities, says the completion of the CSO Centre is a milestone that marks the end of a four year post-earthquake restoration of the Christchurch Town Hall.

The huge project began in June 2015 and the decision to create a purpose-built facility for the CSO was made in July 2017. Originally it was planned that the CSO would be housed in a stand-alone facility within the Performing Arts Precinct.

“We are thrilled to have reached this final stage in what has been a long and meticulous restoration project," Mr Pearson says. "We’re also very pleased that the CSO, which is one of Christchurch’s best-known arts organisations, now has this well-equipped base in the heart of our city. Having the orchestra’s performers and staff inside the complex will bring even more life to this beautifully refurbished building.”

Warren and Mahoney Project Principal Peter Marshall says the CSO Centre was a natural fit for the Christchurch Town Hall, which his firm originally designed in the early 1970s. “Having the opportunity to design a purpose-built facility allowed us to seamlessly incorporate the Centre into the existing space, with forms and materials reflecting the original building. The CSO Centre is intricately connected to the Town Hall at three levels, bringing new value and life to the complex.”

Sounding out the new CSO Centre:

As a musician, hearing your notes fill a room with a rich, pure sound is a wonderful experience, says the CSO’s principal bassoon player Selena Orwin. Members of the orchestra are still buzzing from their first rehearsal in the Ron Ball Studio, part of the new Christchurch Symphony Orchestra Centre.

Selena says CSO staff and players are excited about having a new home in the central city after using cramped rehearsal rooms in Hornby for nearly eight years.

The acoustics of the new rehearsal space are a vast improvement. “There were many happy faces in the orchestra at our first rehearsal. Not only is it aesthetically pleasing but the sound is warm and clear. We had the chance to work on details in the music that would not have been possible in the old space.”

As well as her role as a member of the orchestra, Selena is also the CSO’s Community Engagement Co-ordinator and says being in a high profile, central location will make it more visible and boost the orchestra’s accessibility for local residents.

“Being so central will make an enormous difference to our activities in the community. We’re hoping it will draw in a huge group of people who have never had any connection to the orchestra.”

Selena has been part of the CSO since 1987 and has performed in the Christchurch Town Hall many times. “I’m sure it’s going to bring a great boost to our playing and the feeling amongst the players. This feels really special actually, like we are coming home somehow.”