Cyclist numbers step up a gear 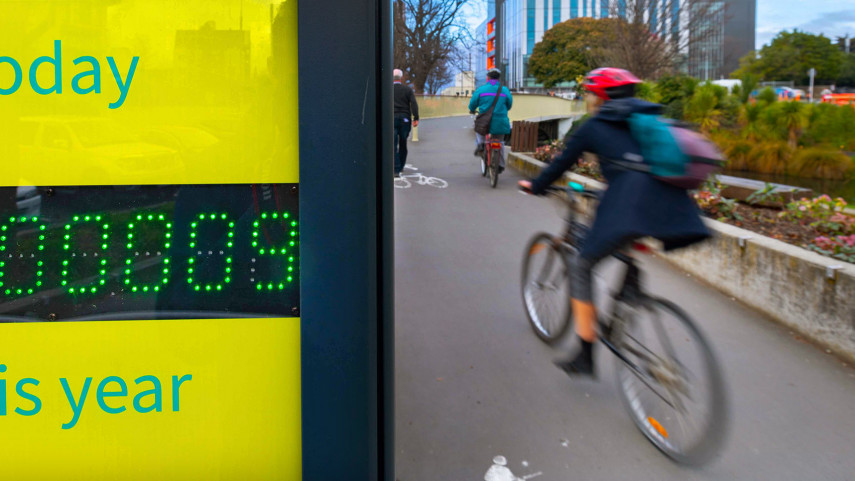 Christchurch’s investment in improved cycling facilities is paying dividends, with the number of cycle trips recorded in the city jumping by 11 per cent in the past 12 months.

That data provides a snapshot of cycle activity throughout Christchurch. The cycle counter at the Antigua Bridge ticked past the 100,000 mark this week - a milestone that took only 97 days to reach.

It does not include the number of cycle trips captured by the visual cycle counter recently installed at Christchurch’s Antigua Bridge as part of Christchurch City Council’s Smart Cities programme.

That Counter, which displays real-time information about the number of people biking past, this week ticked past the 100,000 mark. With over 1200 cycle trips per day over winter, it has taken only 97 days to reach the milestone.

“We have been working hard to make Christchurch a safe city for people biking so it is really pleasing to see such strong growth in cycle trip numbers,’’ says Cr Pauline Cotter, who chairs Christchurch City Council’s Infrastructure, Transport and Environment Committee.

“We expect that growth to continue as the weather warms up and work is completed on more of our major cycleways. The increasing number of cycle trips being recorded in the city suggests people are beginning to understand how easily and safely they can get around the city by bike and are seeing that there is an alternative to going by car,’’ Cr Cotter says.

Work has recently been completed on the Linwood Park to Dyers Road stage of the Rapanui-Shag Rock Cycleway and on the first stage of the Quarryman’s Trail, which links central city to Hoon Hay.

Work on the second stage of the Quarryman’s Trail – the section from Hoon Hay to Te Hapua – will start in later this year.

Construction is also under way on the Wilsons Road to the Tannery section of the Heathcote Expressway.

The Council’s investment in new cycleways has earned it national recognition.

Earlier this month the new 5.6km cycleway connecting central Christchurch and the University of Canterbury – dubbed the Uni-Cycle – was named the Supreme Winer at the New Zealand Bike to the Future Awards. It also took out the Built Excellence Award.

Judges described the cycleway as an “exemplar project”.

Council Transport Planning and Delivery Manager Lynette Ellis says it is great to see more people using bikes as cycling has health benefits, reduces congestion and is good for the environment.

“An extra 88,500 cycle trips year means less cars on the road and less demand for parking spaces so it is of benefit for all road users,’’ Ms Ellis says.