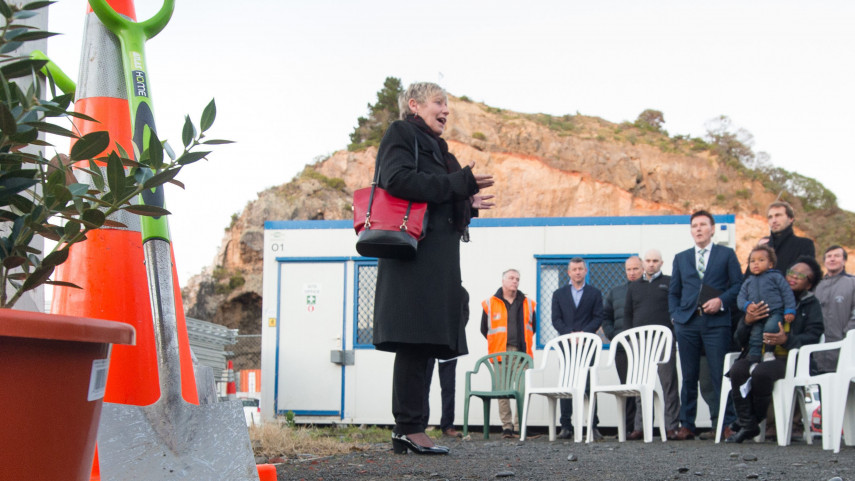 A dawn blessing on the site of the new Sumner library, community centre and museum has paved the way for work to begin on the multimillion-dollar project.

Christchurch Mayor Lianne Dalziel joined members of the Sumner community at the site on the corner of Nayland St and Wakefield Ave this morning for a whakawātea (blessing) and to witness the first sod being turned.

Contractors Armitage Williams Construction will officially begin working on site on Monday. They have been awarded the contract to construct the two-storey 1300 square metre building that will become home to Sumner’s library, community centre and museum.

The building will replace facilities that were lost as a result of the earthquakes.

"The Sumner community have been fully engaged in making this facility a reality and today is about the spirit of collaboration and partnership,'' Mayor Dalziel told those assembled for this morning's event. "Bricks and mortar don’t make buildings, it's just the structure. The Sumner community will bring their new library, community centre and museum to life in such a variety of ways. It will be a community centre in the real sense of the word.

"The contractors, Armitage Williams, have done a wonderful job across the city. I know that they will be welcomed on site by the Sumner residents and I look forward to gathering again on the same site to celebrate the opening in 2017,'' the Mayor said.

Construction of the new centre is expected to take about 10 months. Christchurch City Council is putting $10 million into the project while the Sumner Redcliffs Historical Society has committed $50,000. The society’s contribution will go towards the construction of the museum.

The design for the building draws inspiration from the local landscape and incorporates natural timber, the colours of the seaside and architectural features from the demolished Sumner Community Centre and Museum.

A concept drawing of the new Sumner library, community centre and museum.

As part of the project the Sumner Redcliffs Historical Society, the Sumner Residents Association, the Hagley-Ferrymead Community Board and Christchurch City Council staff are working to create a new time capsule to replace the one that was found during the demolition of the old Sumner Community Centre and Museum.

That time capsule, found behind the foundation stone, contained a 1907 ediiton of The Press newspaper, old coins and other trinkets.

It is anticipated the new time capsule will be buried in August when the new building’s foundations are laid.