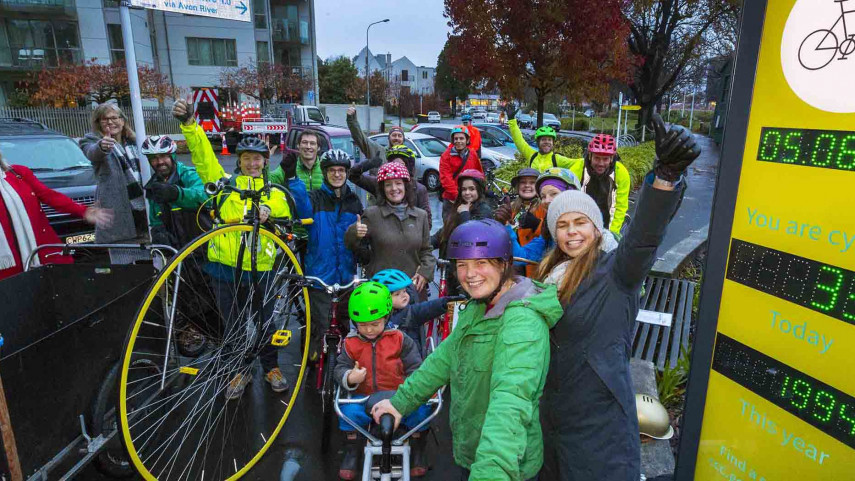 The display, which shows both the number of people on bikes passing each day and the running total for the year, was unveiled today by Christchurch City Council’s Smart Cities programme. A new digital display counter is keeping track of the number of people cycling.

Programme manager Teresa McCallum says while there are numerous cycle counters around the city, this is the first time the data has been made visual to the public in real time.

“Cycle counter displays such as this one have been installed in other countries to communicate, educate and encourage people to cycle. What other cities have discovered is that when you make the cycle count available to everyone, you tend to see a significant increase in the number of people travelling by bike.

“The display helps to show people that there are, in fact, a lot of people biking in and out of the city every day, which means we can have better-informed conversations about the importance of cycling for Christchurch.”

Ms McCallum says every time someone rides by, the change in count is like a virtual high-five, helping to build enthusiasm around cycling and reward cyclists by letting them know they count.

Don Babe, who chairs the cycle advocacy group Spokes, is pleased the cycle counter has been installed.

"It will confirm what we have known for a long time; there are a lot of people that use their bikes as the principal mode of transport for work, education and leisure in Christchurch,'' Mr Babe says.

"Other road users need to be mindful that every time the number clicks over, there is one less car in front of them at the next set of lights and competing with them for carparking.''

The Council’s Smart Cities programme is also trialling a device called Sensibel, which allows people riding in Christchurch to anonymously rate their journeys by pressing a button on their handlebars.  The feedback can be used to highlight areas needing improvement for people who bike.