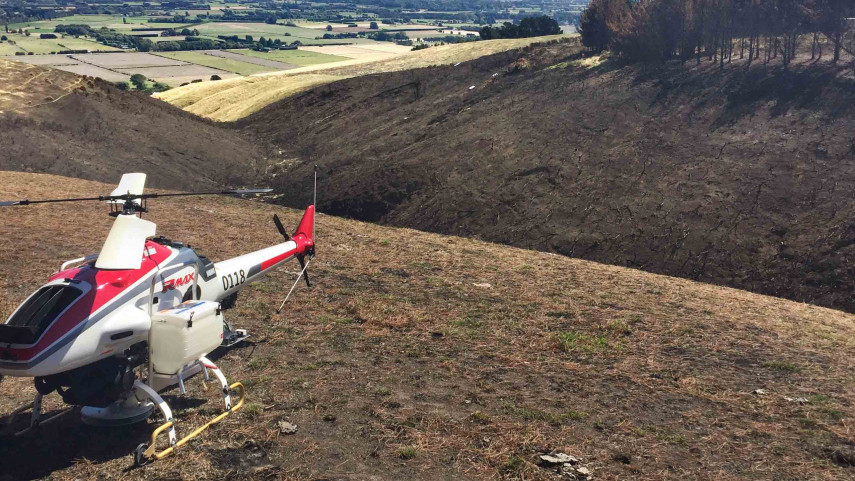 A group of land owners hit by the Port Hills fire have pioneered a New Zealand first – using a drone to spread grass seed as they begin the mammoth task of reseeding their land.

The 17 landowners in the Lansdowne Valley area pooled resources after the fire to buy bulk seed and fertiliser, and have used a combination of a helicopter and drone to reseed 450 hectares. In a New Zealand first a drone is being used to sow grass seed on fire damaged land.

“I know a couple of guys in the  Lansdowne Valley and had been talking with them. About a week after the fire the local landowners had a meeting because they knew they would need to kick on and do something like this. I attended and because I had some contacts with Lincoln (University) and my background in farming, I offered to help co-ordinate it. It’s meant a fair few phone calls, organising the seeds, pulling together what was needed, and mapping from Council.

"I felt like I needed to help out and although (my employer) Craigmore doesn't manage any land there, community engagement is a core value of the company and one of Craigmore's sustainability principles, so they’ve been very understanding and supportive of my desire to help.”

Dr Klaassen said by pooling together the group had been able to buy bulk seed and get expert advice.

“It has been a pretty stressful time for everyone involved, and I think they have really appreciated having someone with a bit of background helping them out. For a lot of these people, they’re small landowners who have land, but might not necessarily know a lot about farming or agriculture.”

The reseeding operation began on Friday and continued through the weekend. Boxes of seed are attached to each side of the drone, allowing it to carry up to 15 kilograms of seed.

Geoff Lamb from Yamaha Motor, the company that owns the drones, said the reseeding had been an excellent opportunity to trial a drone reseeding small land lots.

“From our point of view, it was really successful. We know we won’t replace most traditional seed-sowing methods using helicopters or trucks, but we can cover smaller plots that might be in harder to reach places, so really it’s an option that we’re looking into.”

The drone is fitted with a box on each side, and it can carry up to 15 kilograms of seed each time. The person controlling the drone can control when the box starts releasing seeds, and a tracking map is used to ensure even coverage.

“We fly about three metres above the ground, so it’s quite low, but that stops the spread of seed in the wind,” Mr Lamb said. “We covered about 25 hectares and  did 30 loads. We think it’s been a success, in that we have checked coverage and we have the right number of seeds per square metre. We used every bag of seed down to the wire, so we know we got our quantities right. It’s an interesting development in terms of options for reseeding.”

A full Port Hills fire recovery plan is being worked on by recovery managers Murray Sinclair and Al Lawn with staff from both Christchurch City Council and Selwyn District Council and input from local iwi, ECAN and other agencies. The plan is due to be finalised in the coming weeks.