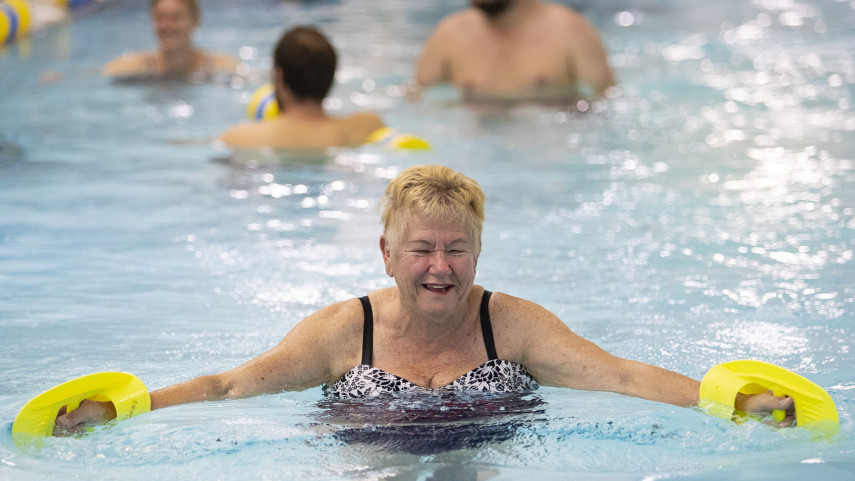 Early birds of all ages are flocking to Taiora QEII for fun, friendship and fitness.

At least 50 people visit Taiora QEII regularly on Mondays, Wednesdays or Fridays between 5.30am and 9am to enjoy a swim, the gym and a social session.

They make up just a quarter of the nearly 200 members of the QEII Early Birds Club, ranging in age from those still going off to work to several in their late 80s and one member nearing 100.

Club Secretary Shirley Forbes, 82, says the Early Birds Club is a “wonderful way to keep fit and socialise with our friends”. A fun approach to fitness for Early Birds members .

“We need to stay healthy, active and independent,” she says. “The east has been badly affected by the earthquakes and it is very important to get people out to exercise and make new friends.

“With the different communities now changed, so many people are isolated and very lonely.

“We do our exercise first then relax with breakfast, a cuppa and entertainment.

“Besides learning a new Maori word a day, we are going to start with other cultures too. We have several Dutch members who also bring in their delicacies to try. We are a multicultural group.”

Mrs Forbes says the new hydrotherapy pool has also been “a blessing to many with disabilities and our older swimmers enjoy aqua-jogging, which is a great way to exercise and chat at the same time”.

Mr Pitama, who started work as a lifeguard at QEII Pool in February 1974, founded the Early Birds Club more than 30 years ago after recognising a need for a social group for older swimmers.

“I realised many people were working out in different areas of the pool and gym and thought it would be good to meet afterwards and socialise,” he says.

“We had numerous bus trips and barbecues. We were even taught how to kayak in the diving pool and we kept up numerous exciting exercises on the original athletics track.”

After the earthquake-damaged pool was closed and then demolished, club members stayed in touch with monthly lunches and morning teas.

“Sadly, more than 20 members have passed away but their photos are displayed to keep their memories alive,” Mrs Forbes says.

Today, most of the Early Birds members are locals but some come from the other side of the city and even Pegasus. Members also travel further afield for lunches and trips, with a recent visit to Hanmer Springs “a great success”.

“We returned to the QEII site in June last year when the complex reopened with the original 30 members but now have nearly 200 on our books,” she says.

“We have also had wonderful local support for our return, particularly from Community Board member Linda Stewart.

“The new Tairoa QEII has become that place of fitness, wellness and friendship again.

“The Early Birds group has rebuilt those priceless things we lost.” Members of the Early Birds gather at Taiora QEII.