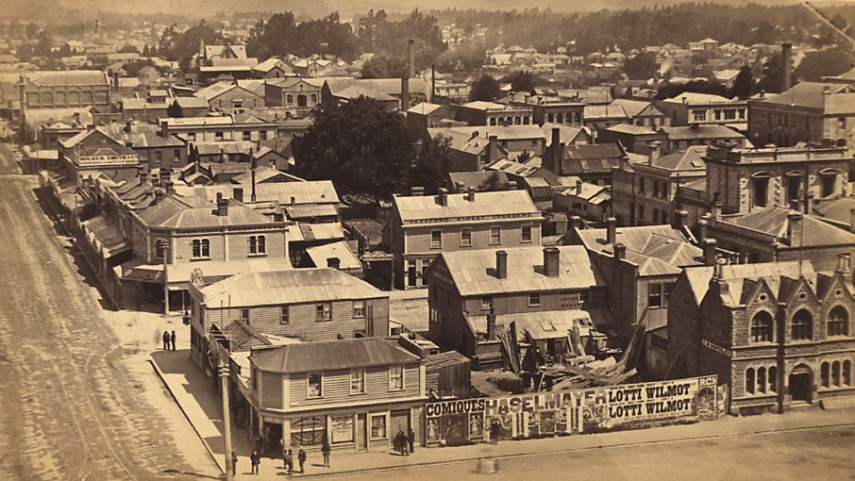 At 30 metres high the tower soared above the surrounding buildings, most of which were no higher than two stories.

An enterprising local photographer called Edmund R Wheeler saw an opportunity to capture the growing city from the lofty heights of the new tower.

With his photography business in Cathedral Square located just a short distance away, it was little more than a week later that Wheeler made the short trip across the square and up into the tower.

Pointing his camera north, east, south and west he took ten photographs that day which were later published in a book using an accordion-like format.

When fully unfolded, a photographic panorama of Christchurch was revealed.

One hundred and forty one years later, only a few copies of Wheeler’s Panorama are known to exist in Aotearoa New Zealand – Christchurch City Libraries, Te Papa and the Macmillan Brown Library at the University of Canterbury each hold a copy.

The photographs can be viewed here.

An exhibition showcasing Wheeler’s Panorama is on at Tūranga in the lead-up to a free public talk by Local History Librarian Glenn Coster on 28 June.

Mr Coster says the panorama reveals some fascinating insights into what life was like in Christchurch at the time.

“There are also some rather intriguing aspects. For instance the travelling magician Professor Haselmayer - who was performing shows in Christchurch at the time - appears to be shown in one of the photographs in front of his own billboard!

The figure in front of this advertising hoarding may be the magician Professor Haselmayer himself.

“What is quite odd is that he is standing in such a way that his outline matches with the billboard behind him. This could be a trick of photography; or a different person who by coincidence looks like him; or a knowing setup. It's quite intriguing nonetheless!"

For other fascinating insights into life and goings-on in 1880’s Christchurch, please book here to join Glenn Coster at Tūranga from 2-3pm on Tuesday 28 June.