Elephants in the Avon part of Christchurch’s rich past 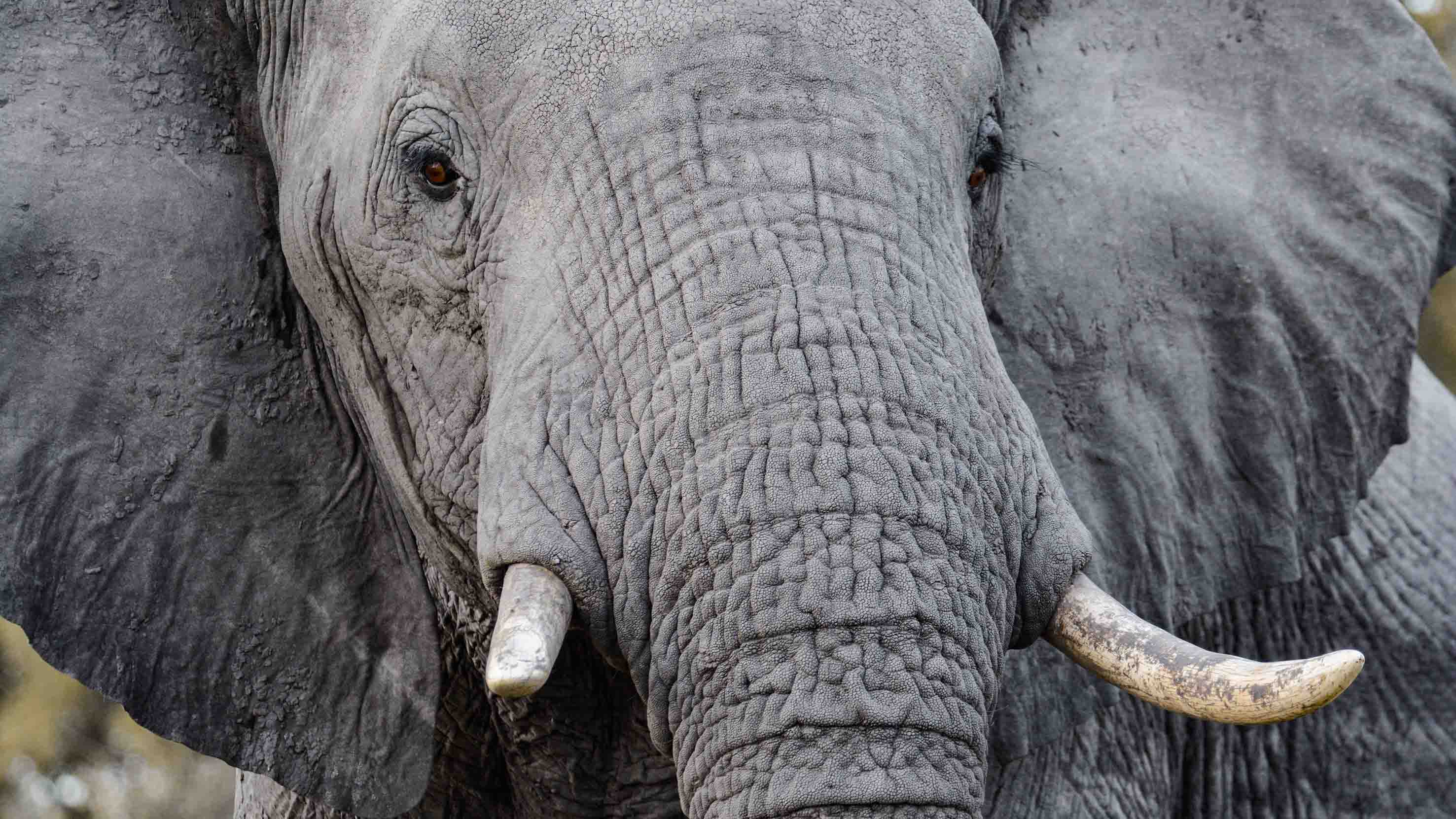 The earthquakes may have claimed many of our heritage buildings but Christchurch is still teeming with connections to our past – if you know where to look.

“There are many objects around Christchurch that people probably walk, cycle or drive past each day unaware of their historic significance or the story behind them,’’ says Christchurch City Council Heritage Team Leader Brendan Smyth.

“These objects provide a link to our past and to the everyday lives of those who lived here before us so they have immense historical value.’’

Among such items are: 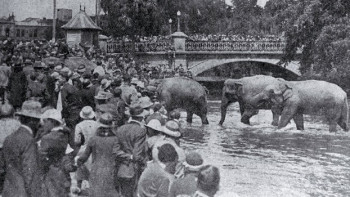 Elephants cool off in the Ōtākaro Avon River to the delight of the gathered crowd in 1934. CCL-PhotoCD15-IMG0092.

Ever wondered why there is a somewhat unusual paved slope down to the Ōtākaro Avon River in Victoria Square?

It is a horse watering ramp – a tangible reminder of the importance of horses and horse-drawn transport in Christchurch during the 19th and early 20th centuries.

The ramp is believed to have been built sometime between 1874 and 1886. It was designed to be wide enough to allow traders in what was then called Market Square to water their horses and to pull their carts into the river for washing.

In 1934 the ramp was used to water elephants from a travelling Australian circus after they had paraded through city streets. 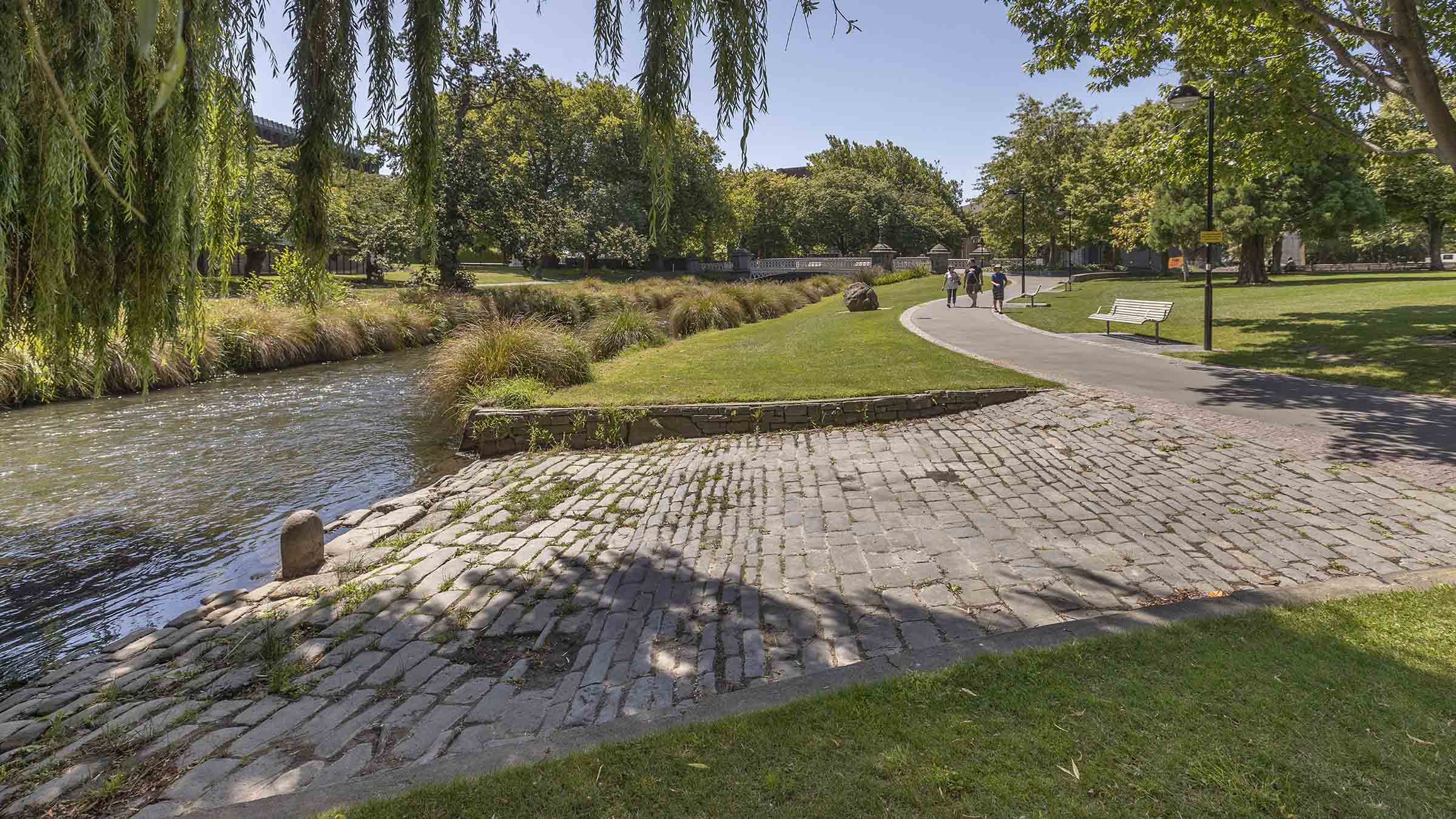 If you’ve walked down Armagh Street, by the Canterbury Provincial Council Chambers, you’ve probably never paid much attention to the kerbstones at your feet.

They are historically significant though because they are one of the rare surviving examples of early colonial kerbstones.

The exact date the kerbstones were laid is unknown but it is most likely they date back to the early to mid-1860s.

The kerbstones reflect the importance of drainage in the development of the colonial city and the transition from muddy tracks to formed roads, footpaths and gutters through the latter half of the 19th century. 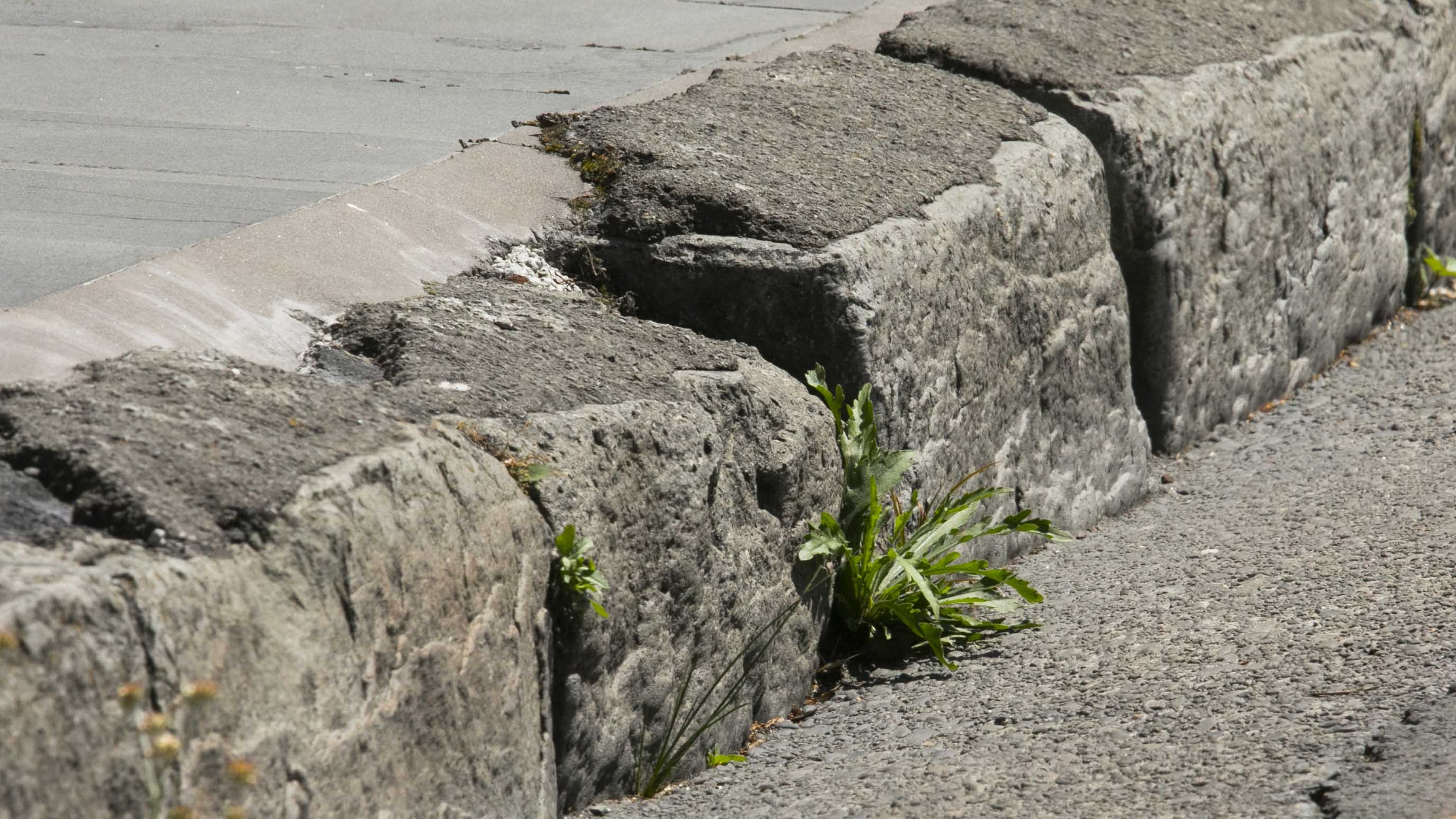 The Gas Lamp and Hitching Post in Cambridge Terrace

Outside the main entrance to the Canterbury Club, in Cambridge Terrace, is another reminder of the days when horses were the main form of transport in the city.

The 19th century hitching post that stands there was erected sometime in the late 1870s or early 1880s so that gentlemen visiting the then newly established Canterbury Club would have somewhere to tether their horses.

In the Victorian and early Edwardian periods, hitching posts stood outside most inner city businesses, theatres, halls and clubs but today only a few remain.

Also on Cambridge Terrace is the Gas Lamp, the only surviving gas street light in Christchurch. It dates back to about 1875 and is reminder of the times when streets were manually lit by gas each night.

Next time you’re travelling between Christchurch and Akaroa you might want to stop at the junction of Gebbies Pass Road and State Highway 75 and check out the old concrete water trough that sits behind the café.

The water trough dates back to 1892 and was originally next to a site that contained a blacksmith’s, post office and, after 1901, a telephone office, making it a central meeting point for the local farming community.

In the late 19th century, a good water supply for animals being used for transportation was a valuable asset and as Gebbies Pass was an important route linking Akaroa and Little River with Lyttelton and Christchurch, the trough was well placed for people using the road. 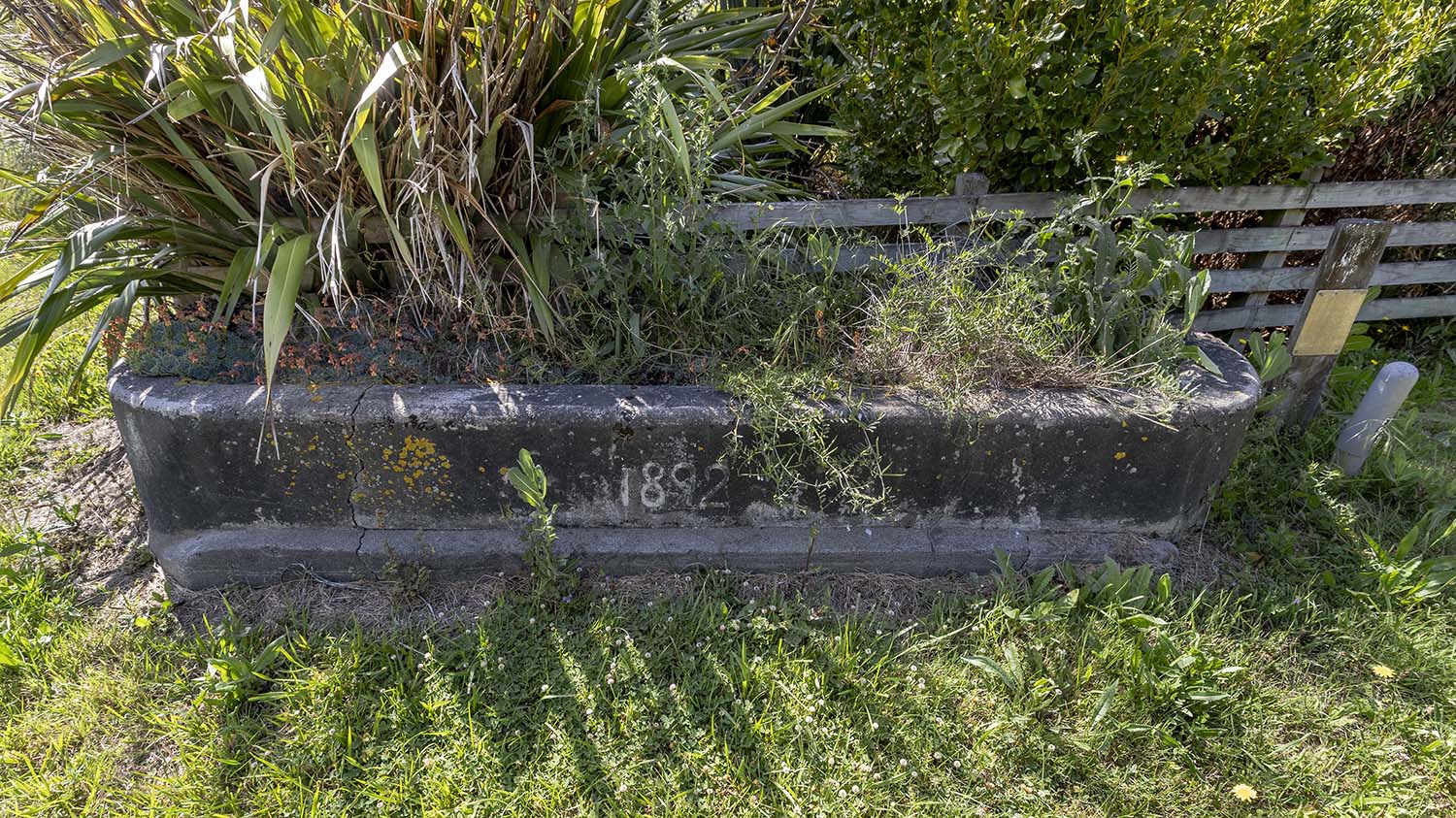 The seaside tram shelter on Main Road, Redcliffs, dates back to the 1930s when trams were the main form of public transport in Christchurch and a regular tram service ran between the city and Sumner.

Sumner, in the late 18th century and early 19th century, was a health spot and popular resort for city residents, attracting many day-trippers.

Jointly funded by the Sumner Borough Council, the Christchurch Tramway Board and the Main Highways Department, construction of the tram shelter in 1934 cost £50. It was made from local stone, timber and cedar shingle and has a cast iron fluted column.

The tram shelter still plays a part in the city’s transportation network as it is now serves as a bus shelter. It has recently been repaired and stengthened, following some minor earthquake damage. 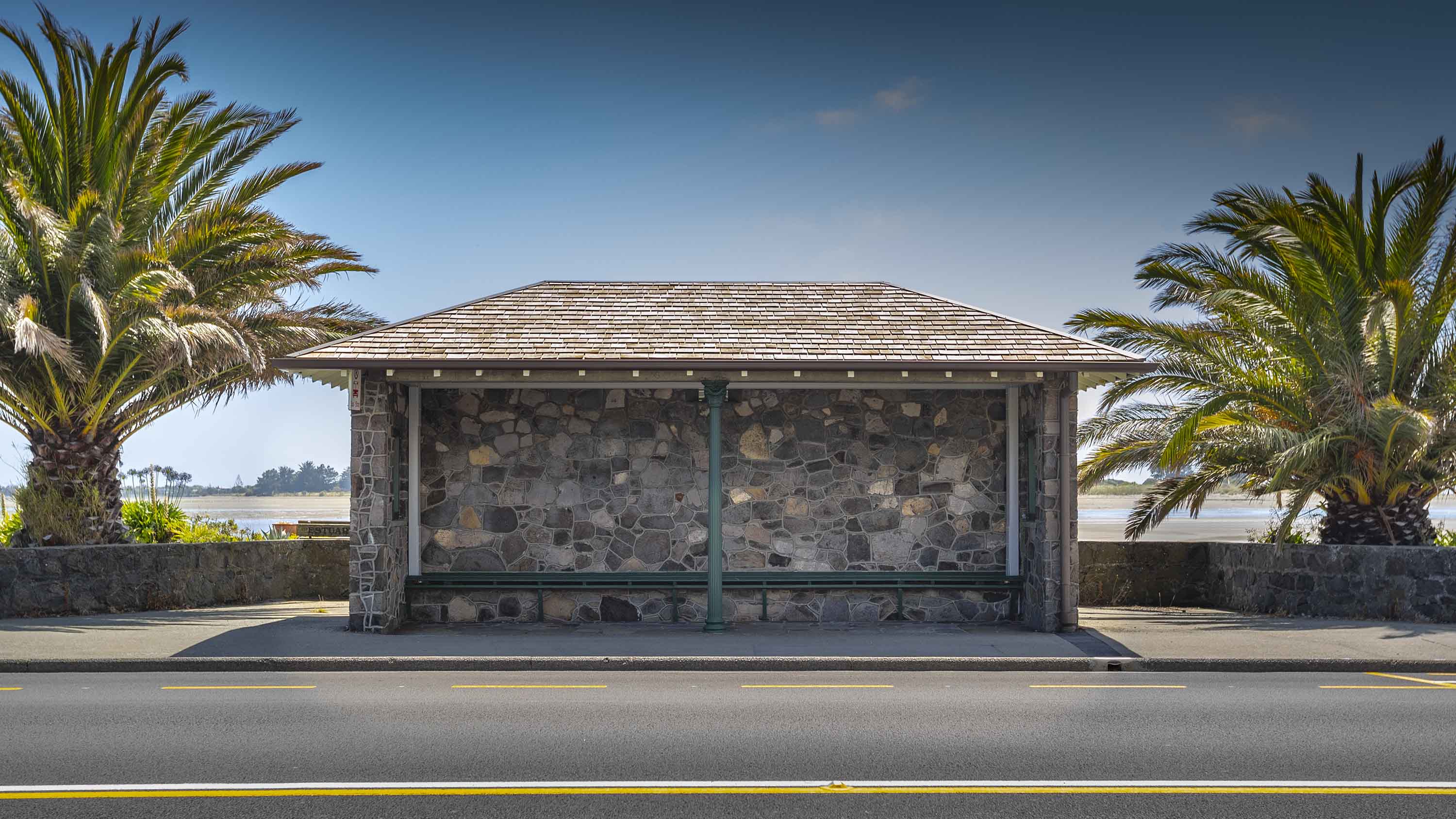 Find out more about heritage in the city.