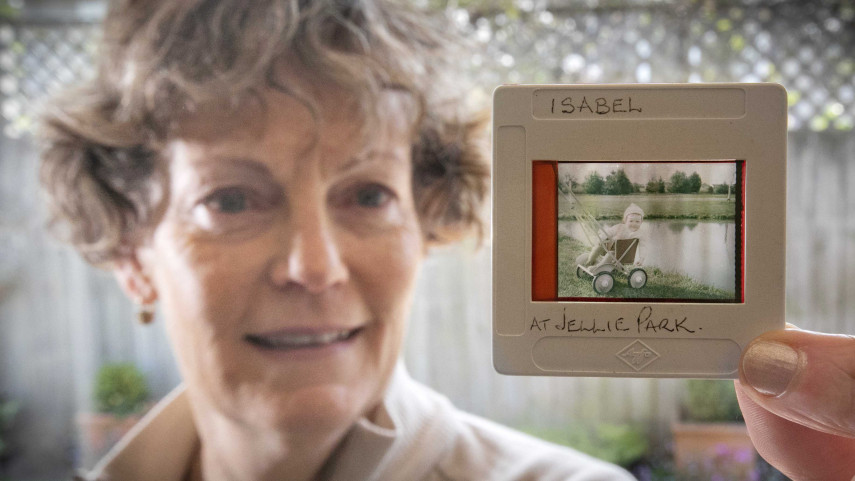 Her late father Ian Tweedy was a hobby photographer who took thousands of slide photographs in his lifetime, recording family holidays, picnics and tramping trips.

Some of his images from the 1950s, 60s and 70s have been added to Christchurch City Libraries’ archives and after Ms Tweedy sorted through her dad’s collection and realised some would have a wider interest and historic significance. A selection can be seen on the Discovery Wall at Tūranga.

She has sent 28 slides to the libraries’ Photo Hunt, which is being held for the 12th year as part of the Christchurch Heritage Festival from Saturday until Sunday, 8 November.

“I remember how exciting it was when a new box of slides arrived,” Ms Tweedy says. “Dad would put them all in order and we’d get friends around to watch them with a break in the middle for a cup of tea and some baking. The slides are a record of our childhood.”

Her father meticulously labelled each slide with dates, names and places and kept them in wooden cases he made himself. 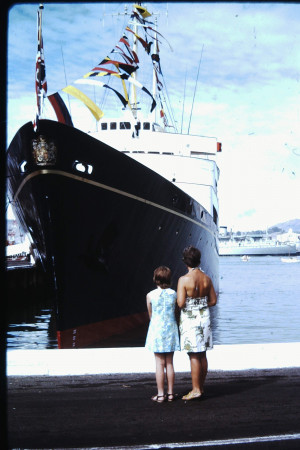 Ian Tweedy's photo shows Isabel and her mother in front of the Royal Yacht Britannia at Lyttelton.

Some of Mr Tweedy's photos entered in the Photo Hunt show a family sledding on Lake Ida, Isabel and her mother standing in front of the Royal Yacht Britannia at Lyttelton wharf when Queen Elizabeth visited for the British Commonwealth Games in 1974, and the Hay’s Christmas Parade.

Others show a horse drawn tram on the Papanui line, the Wings and Wheels air show at Wigram and Ms Tweedy’s sister and a friend pushing a lawnmower as children.

One taken from the Christ Church Cathedral spire, looking down Colombo St, won a commendation in a 2016 Photo Hunt, and one taken in Victoria Square at night won the overall prize the same year.

Christchurch City Council Head of Libraries Carolyn Robertson says the theme of this year’s hunt is Encounter Our Stories and the goal is to gather a wide collection of photographs from across the community.

“These images reveal unique, personal stories and they’re a great way to bring Canterbury’s heritage to life in a way people can really relate to. Mr Tweedy’s photos are a vivid record of family experiences and local history going back seven decades.”

Photo Hunt images are uploaded to the Discovery Wall at Tūranga Central Library and can be seen by visitors keen to learn more about the city.

Ms Tweedy says her father would be surprised and quietly pleased that his images are being shared. “We knew that they were well worth saving. But he would be absolutely astounded to know they are now being held as historic records.

“He was a very humble man and he didn’t have a lot to say but photography was a real interest for him. He would be very embarrassed but quietly pleased.”