Final salute for Field of Remembrance 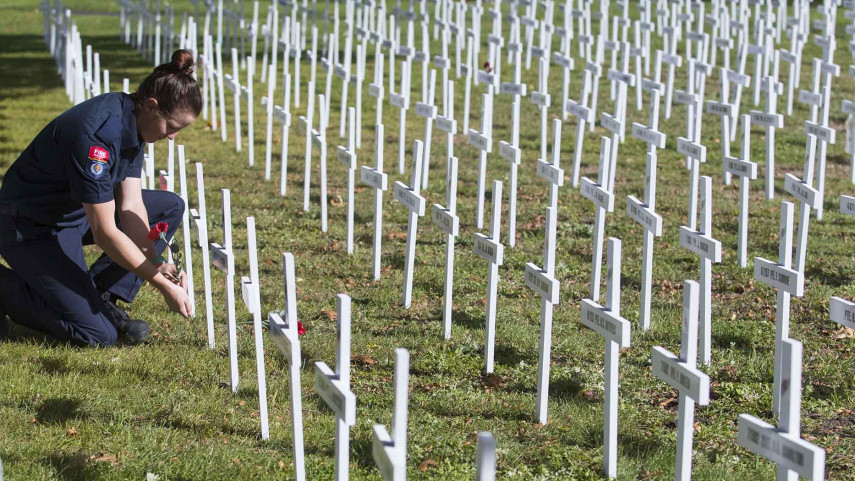 Memorial crosses honouring thousands of Christchurch’s fallen servicemen and women dominate Cranmer Square for the final time as part of the Fields of Remembrance project.

The field was established in 2015 for Anzac Day, with 632 named crosses commemorating Cantabrians who died in World War I in 1915.

Red poppies have been placed by each white cross.

Regional fields have also been established in Auckland, Wellington and Dunedin, along with several smaller fields in towns.

The Fields of Remembrance Trust – made up of the Passchendaele Society, the Royal New Zealand Returned and Services' Association (RSA) and the Auckland RSA – encourages communities to honour the more than 18,000 New Zealanders lost in the Great War.

The fields also highlight the service and sacrifice of past generations to young people today.

On Armistice Day 2018, a field of 18,277 crosses will be erected in Auckland Domain to mark the centenary of the end of World War I.

To find out more about the experiences of those Cantabrians in Europe and the Middle East – and those left behind – people can visit the Canterbury and World War One: Lives Lost, Lives Changed exhibition at Canterbury Museum.

Meanwhile, an education pack about the First World War – for year seven to 10 students – is available from Christchurch City Libraries. It also focuses on the Canterbury region.