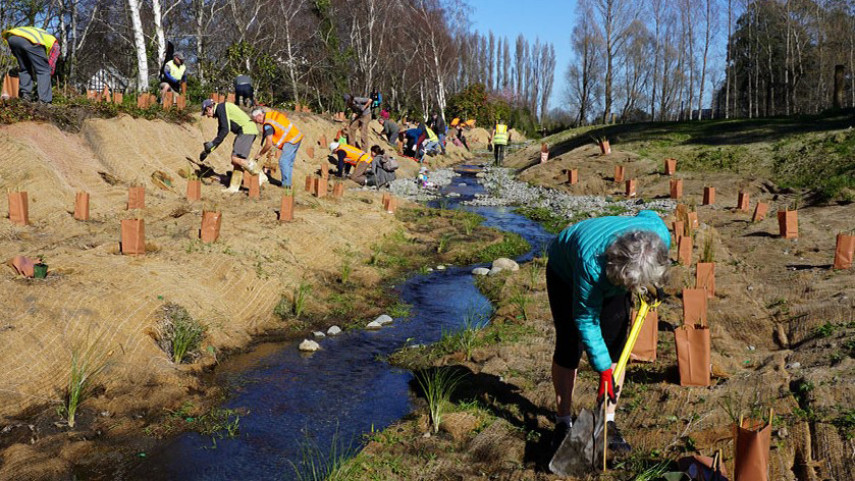 Local landowners and community members armed themselves with spades and smiles to help the Cashmere Stream Care Group complete the final stage of a four-year restoration and enhancement planting project.

Around 2500 natives have been planted in the headwaters of Cashmere Stream thanks to the Cashmere Stream Care Group (CSCG), local landowners, community members, and councils.

Fencing and plantings will protect the banks of the spring-fed stream against erosion and keep the water temperature cooler for the tuna/eels and bullies in the stream.

The shade provided by the plants will help decrease weed species in the stream and the habitat will be more suitable for kōura/freshwater crayfish, which have been spotted in the catchment.

“There was a lot of work that went into preparation of the site by our group members, landowners, Christchurch City Council (CCC), Ravensdown and Environment Canterbury,” Cashmere Stream Care Group Chair Ken Rouse said.

“It’s been a long journey but it’s great to see the outcome with well-established trees and the final round of plants in the ground."

The CSCG applied for funding, weeded in-stream and bank areas, carried out monitoring and, most importantly, worked with landowners throughout the entirety of the project.

Sedimentation from bank damage from stock and the loss of native trees and plants contributed to the deterioration of the clarity and quality of the water.

Since 2016 more than $60,000 of Immediate Steps (IMS) biodiversity funding has been allocated to the project, as recommended by the Christchurch West Melton Water Zone Committee (CWMWZC). This funding went towards plants, plant guards and fencing, and maintenance of the plants for three years following completion.

More than $500,000 has been contributed through labour and resource from Christchurch City Council.

“The project shows what can be achieved when landowners, community, and councils work together towards a common goal,” CWMWZC Chair Kevin Brown said.

“Protecting Cashmere Stream remains a priority for the health of the waterways throughout the catchment, including the Heathcote/Ōpāwaho River downstream.

“Seeing a project like this run so well and so collaboratively has been really inspiring,” he said.

Christchurch City Council has added curves to the stream and re-contoured the banks to make them favourable for native plants like kahikatea, kaikōmako, kowhai, and koromiko.

“We introduced some ‘meanders’ (a winding course) into the stream, as it had been originally created into a straight, drain like waterway,” Christchurch City Council Principal Waterways Ecologist, Dr Belinda Margetts, said.

“We also introduced some habitat in the forms of logs and planted the banks with native vegetation.

“The long-term benefits of the works in this stream, and the waterways in the wider catchment, is really worth investing in, to increase biodiversity and improve water quality,” she said.