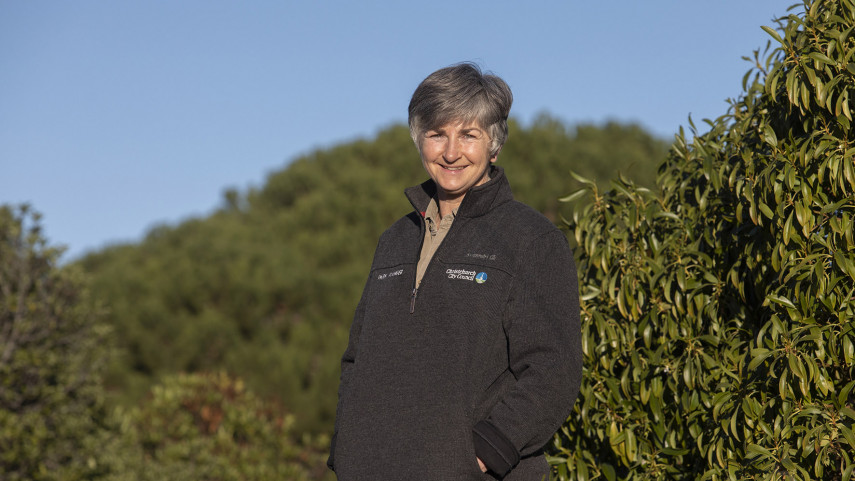 After a high-flying 20 year career managing commercial property in San Francisco and London, including the famed Covent Garden estate, Fiona took a year off after moving to Christchurch with her husband in 2015.

She’d started to think about returning to work when “complete serendipity” got involved.

“I was running with friends out the back of Sugarloaf when we saw this unusual looking plant. I took a picture and when we got to the carpark at the top of Bowenvale I showed it to a Park Ranger who’d pulled up. It turned out she was the Council's Ranger Project Manager, Di Carter.”

That was in May 2017, only a couple of months after the Port Hills fires had devastated large tracts of vegetation.

“I said ‘I’m not working at the moment, if you guys ever need anybody to help out on track maintenance or anything, I’m using the tracks all the time walking and biking.’”

“That was a Saturday at 10am and I started work the following Thursday on a three month contract helping with volunteers.”

Fiona's now been a permanent staff member for nearly three years and commutes from her home in Sumner on an e-bike each morning, up Evans Pass and along Summit Rd to the Park Ranger base at Victoria Park.

Managing the volunteer planting programme is one of the things she most enjoys about her job.

“Being able to connect with so many brilliant volunteers up here is just fantastic, people who give up their time and come week after week.”

It’s certainly kept her busy. The winter after the fires (May-August 2017) volunteers planted 7200 natives, replacing 6500 plants lost in the fires which had been put in by volunteers over the previous 15 years.

And while it’s very different from her earlier career - “I couldn’t wear this!” she laughs, pointing to her work boots and Swanndri jumper - asked which role she enjoys more there’s no hesitation.

“It’s feeling that I’m doing something that actually makes a difference. At the end of the day I can go and plant some trees and feel like I’ve done something positive rather than just numbers on somebody’s balance sheet.”

She encourages anybody thinking of joining the Port Hills volunteer teams to just do it.

“There’ve been a lot of friendships formed over the years and there’s huge satisfaction not only in planting but the maintenance programme as well, keeping it all going and growing.”