Grandparents get iPad savvy at the library 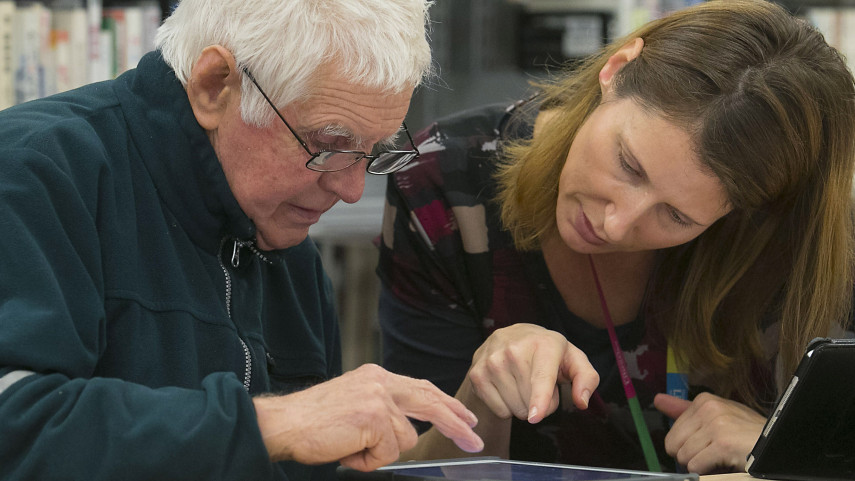 Six weeks ago, Marilyn Tiller was so afraid of her iPad, she wouldn’t even touch the little bundle of technology.

Now, the 77 year old grandmother is FaceTiming her son in Dubai, downloading e-books from the library, and she’s even mastered the art of the ‘selfie’.

Marilyn is part of a new generation of web-surfers, thanks to an “Introduction to iPad” course offered by Christchurch City Libraries.

Each Monday for the last six weeks, a group of 70-something library users have been meeting at Central Library to perfect their cyber skills with two course tutors.

For Marilyn, it has enabled a connection with her grandchildren overseas, and access to the new and changing face of the library.

“I was so afraid of it. I wouldn’t touch it to start with, but now I can see the value in it.

“My son and family are living in Dubai and couldn’t Skype us -they needed to Facetime instead, so we got the iPad. It’s lovely for my grandkids in Dubai. I can watch their netball videos and their ballet videos that they send through. It’s lovely.”

Marilyn had also downloaded e-books from the library, learned how to use the GPS function and used it to search for recipes.

Christchurch City Council Central Library team leader Guy Field said the course had been a big success and a waiting list had started for next term.

“This is about the changing face of the libraries, and moving with the needs of library users. Learning Centres at Council libraries have been running these courses for about two years, but we decided to give it a go here at Central Library, running it just within the library.

“It’s been a huge success and it’s great that we can use it to inform our ideas as we think about how we want to do things in the new Central Library.”

The participants have been learning everything from how to take selfies, access their email, through to using library resources such as e-books, audiobooks, magazines & newspapers on their iPads.

At 78, Nan Berry said she had set a goal of mastering the iPad this year.

“(The iPad) was a Christmas present and it’s been my challenge for the year. I’ve always had a computer, but I haven’t had one of these and I just really wanted to know the nuts and bolts.

“The course has been so useful. It’s nice to have two tutors working with us all. We get a lot of one on one time. I’m getting ebooks from the library now and using my iPad every day for Facebook.

“I’ll be recommending it to all my friends. It has definitely helped with accessing library resources.”

Nan, a resident at nearby Bishopspark Retirement Village, and another course participant had been taking their learning back to other residents, even using their newfound word "emoji" during scrabble.

Fellow course participant Ron Healing, 78, said he had watched his grandchildren on the iPad and decided it was time for Grandad to learn the ropes.

“I’ve had a computer for a number of years, but my daughter told me I should buy one of these iPads, and I always do what she says, so I did.

“All I could do when I started was turn it on. But now I can email, I know how to get Apps, I’ve learned how to take a selfie. It’s great. And I must add, we get a cup of tea and a biscuit!”

Find out more on courses at Christchurch City Libraries.