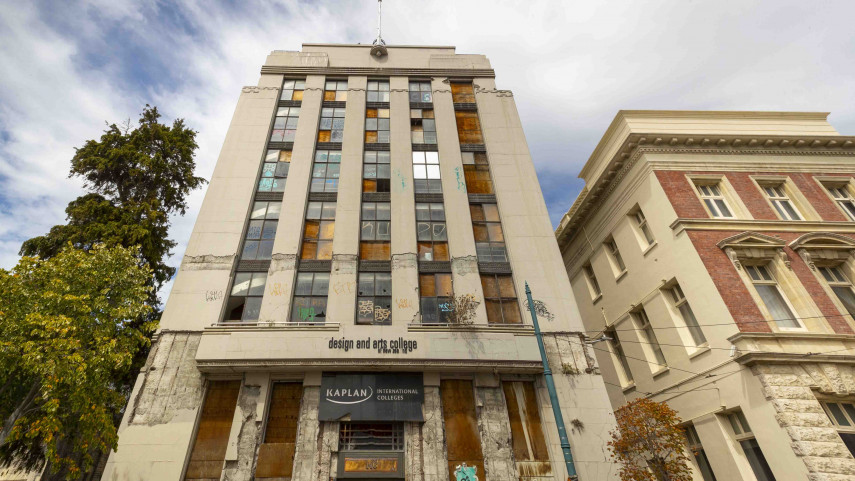 The owners of two quake-damaged historic buildings in the central city are being given extra time to complete the restoration works required to access previously approved grants from Christchurch City Council.

In February 2020, the Council approved a Central City Landmark Heritage Grant of $600,000 for the former State Insurance Building at 116 Worcester Street.

The art deco influenced building dates back to 1930s and is scheduled in the Christchurch District Plan as ‘Highly Significant’ and by Heritage New Zealand Pouhere Taonga as a Category Two Heritage building.

It is owned by 116 Worcester Street Ltd, who intended to fully upgrade it and restore its historic façade, including the original coat of arms. They planned to use the refurbished building for living and rental accommodation.

However, uncertainty regarding the market for visitor accommodation following the closure of international borders due to COVID-19 has resulted in delays to the planned work.

“The Central City Landmark Heritage Grant that we approved hasn’t been paid yet as the building owners only receive it once the works covered by the grant are completed,’’ says Councillor Sara Templeton, Chair of the Council’s Sustainability and Community Resilience Committee.

“The grant originally required the work to be completed in 18 months, but given the disruptions caused by the COVID-19 lockdown we have agreed to give the building owners until the end of February 2023 to get the work completed and to uplift the grant,’’ Cr Templeton says.

The Sustainability and Community Resilience Committee has also decided to give the McLean’s Mansion Charitable Trust another 18 months to uplift the balance of the $1.9 million Central City Landmark Heritage for McLean’s Mansion.

Two-thirds of the grant has been paid out, but one third remains unclaimed.

It is the third time extension given since the grant was approved in December 2016.

“Work to restore McLean’s Mansion is under way and some elements have been completed, such as relevelling of the building. However, this is a particularly complex restoration project as the mansion has 53 rooms and the interior of each room has to be dismantled and restored,’’ Cr Templeton says.

“The team working on the restoration are proceeding in a careful and steady manner because they are trying to save as much of the heritage fabric of the building as possible, so the project is taking longer than was envisaged when the grant application was first made.’’

McLean’s Mansion dates back to 1900 and was built for one of the wealthiest men in Canterbury at the time, Allan McLean.

Mr McLean stipulated in his will that the house – known as Holly Lea – become a home for women who had fallen on hard times. It fulfilled that role until the mid-1950s before being sold to the Government. The building then became a dental nurses’ hostel, supporting the establishment of the New Zealand Dental Service in the city.

From 1977, various tenants occupied the building before it was bought in the 1980s by the Christchurch Academy for use as a vocational training centre.

McLean’s Mansion is scheduled in the Christchurch District Plan as ‘Highly Significant’ and by Heritage New Zealand Pouhere Taonga as a Category One Heritage building.