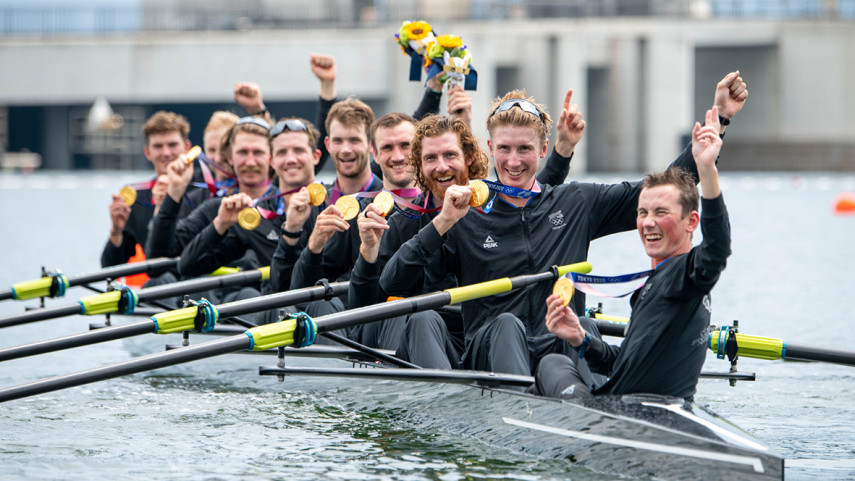 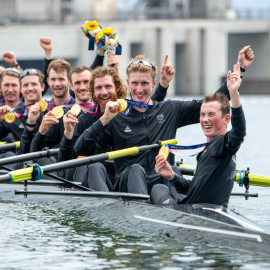 Tom Mackintosh (first in boat facing the camera) with the winning men's rowing eight in Tokyo.

The Cambridge-based rower is part of the now legendary New Zealand men’s rowing eight that won gold in Tokyo.

Just four years ago he was studying towards a BCom at Canterbury University.

Needing support to attend the U23 World Championships in Poland and Bulgaria Tom applied for two Youth Development Fund grants from his local community board. Attending those  competitions  would prove pivotal in the development of his rowing career.

“In 2017 and 2018 I was fortunate to be included in the fund to support my competing. These seasons were instrumental for my career. I learnt key lessons in leadership, motivation and teamwork, three skills that I carried through to Olympic gold.”

“I will cherish that moment for the rest of my life. However, the most memorable part of the games was all the support I received from the New Zealand community. We have an amazing community and I felt honoured to be a Kiwi wearing the fern in Tokyo.”

He says winning a medal in Tokyo was amazing.

Halswell-Hornby-Riccarton Community Board Chair Mike Mora says Tom’s is a remarkable success story and one the board is proud to have played a small part in.

“Supporting young people to pursue their passions, whether in sports or the arts, is an important part of what our community boards do here in Christchurch,” Mr Mora says.

“When Tom applied for the funding he stated in the application that his future goals included being selected to compete at the Tokyo Olympics in the men’s sweep squad. Not only did he go on to compete but he won gold.”

Back in Christchurch completing his two-week stay in managed isolation, Tom says he’s seen first-hand how the Olympic games has brought the nation together.

He strongly encourages young people to utilise the Youth Development Fund: “Just like I was, our future Olympians are currently in Christchurch today.”