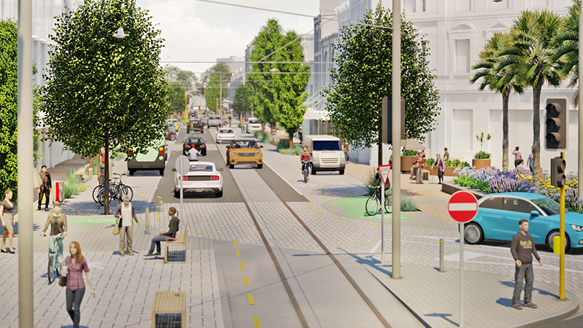 Public submissions on a proposal to revitalise High Street from Cashel to St Asaph streets, and extend the tram, will be considered by a Hearings Panel on Thursday. High Street is in line for a make-over.

Earlier this year Christchurch City Council released its proposed plans for repairing the earthquake damage to High Street and making the street more attractive and people-friendly.

The proposed plans included an extension of the tram route along Lichfield Street, down Poplar Lane and back up High Street.

In response to its call for community feedback on the plans, the Council received 90 submissions.

On Thursday a Hearings Panel made up of elected members will consider the submissions and a staff report which recommends that the Council proceed with the proposed upgrade of High Street, with some minor modifications, and the tram extension.

Read the staff report prepared for the Hearings Panel.