High Street gets a colourful revamp 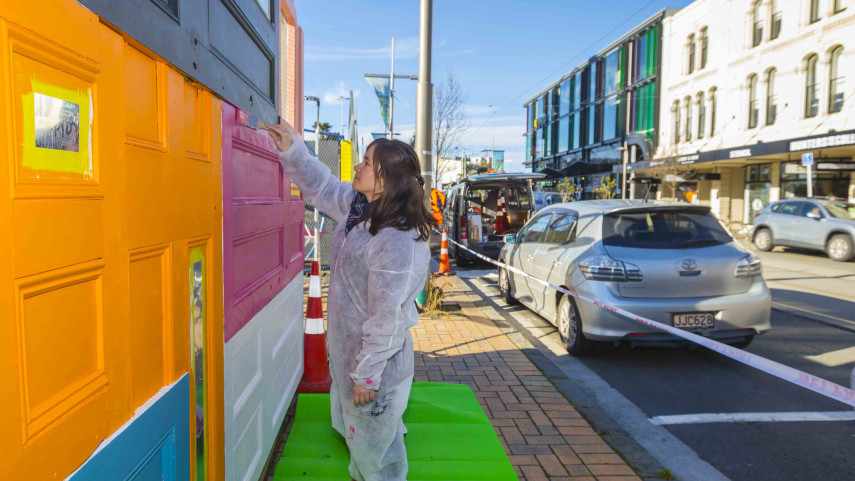 A makeover has given a shot of colour to one of the city’s most distinctive streets. Amy Couling is part of a group of Ara Institute of Canterbury Visual Art students who have repainted a fence artwork along High St.

A temporary fence artwork on High St originally created in 2014 by artist Mark McEntyre as part of the transitional High Street Project has been given a bold, new look by a group of students.

Mr McEntyre, an Applied Visual Arts tutor at Ara Institute of Canterbury, has worked with nine of his second year Visual Art students to update the four-year-old panels with fresh paintwork.

The rejuvenation project is part of Christchurch City Council’s Enliven Places programme, which aims to make city spaces more vibrant and appealing while longer term projects are under construction.

The students planned a new colour scheme for the panels and sourced materials, gaining important work experience in the process, Mr McEntyre says. The group chose bright colours to reflect their optimism for the future of the city and to tie in with some of the other street art nearby.

“It’s a good opportunity for the students to be involved and take some of their learning into the real world. They were really organised and into it. It might seem like a small project but the learning that goes into it is invaluable.”

McEntyre says High St has a rich and interesting history and it’s important to preserve it.  Before the 2010 and 2011 earthquakes the thoroughfare was busy with shops, hotels, cafes and art galleries.

Flagship businesses on the character-filled street included Flying Nun Records, Galaxy Records and a well-known Chinese takeaway on the corner of High, Manchester and Lichfield Sts. These landmarks are referenced in some of the abstract designs that make up each panel.

Other panels are inspired by local architecture and birds and plants that would have been common in the area before colonisation.

High St was historically part of a major route to Ferrymead and remains a link to and from Cathedral Square with the Ara campus at the south eastern end.

Council Head of Urban Design, Regeneration and Heritage Carolyn Ingles says the street's diverse history is worth celebrating. “These paintings are reminders of the city’s past and our shared visual memory of this street. We’re really pleased that Ara students have brought them to life again and gained some valuable work experience in the process.”

Ara Visual Art student Amy Couling says it has been exciting to take part in such a large-scale project. She has nostalgic memories of High St’s bustling nightlife pre-quake.

“Our vision was to create a bold, bright colour palette that will bring life back into the artwork and the surrounding area.”