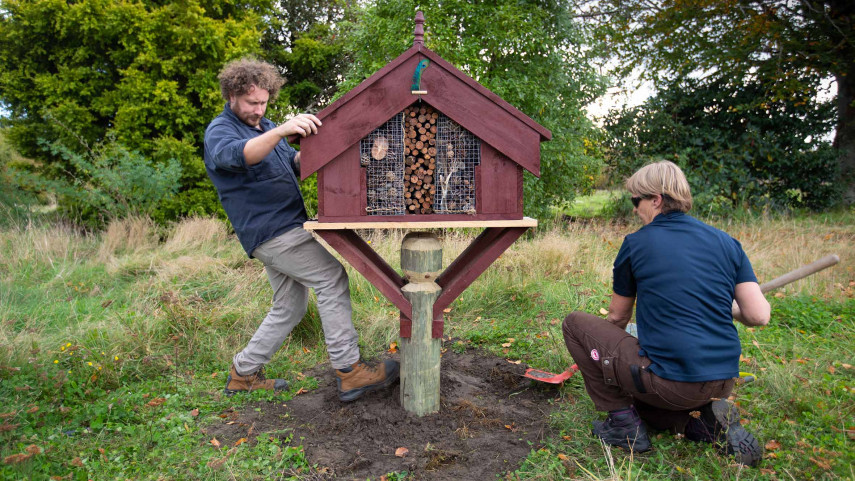 A bug hotel shaped like a whare has been installed in the Ōtakaro Avon River Corridor to help boost the population of native bees.

Christchurch City Council Urban Rangers made and installed the hotel in the Horseshoe Lake regeneration area of the Ōtakaro Avon River Corridor (OARC) in a bid to establish more colonies of ngaro huruhuru/native bees.

In turn, the bees pollinate native plants, including manuka, kanuka and pohutukawa.

“We’re helping the native bee population by building a home so they can do their job more easily. They have to compete with the honey bees so want to give them a bit of a head start,” Council Community Partnerships Ranger Courtney Reid says.

The hotels are filled with flax, pinecones, bamboo and other natural products which the bees can use to establish their habitat.

"We're supporting from the bottom up. So if we establish more habitats for insects and bees, that helps increase the number of native plants and trees in the area, which then attracts more native bird life," Miss Reid says.

The area around Horseshoe Lake was an important mahinga kai site for Māori, so the Rangers thought it was fitting to have the hotel shaped like a whare.

“Staff handmade these wonderful structures in their spare time and also made use of resources that were already here in the OARC, it’s all natural. Even the paint is made from ochre.”

The whare is the first in a number of hotels being installed.

There are at least another six which will be placed in different parts of the OARC over the coming months, including one in Adventure Avenue and another at the intersection of Linwood Avenue and Avonside Drive.

“It will take a while for the bees to make their home, so it won’t be until after winter that we start seeing them going in and out of the whare and other hotels,” Miss Reid says.

“We want to bring a public awareness to native bees and plants in this area, but we also just want to encourage people to get out and explore the OARC."