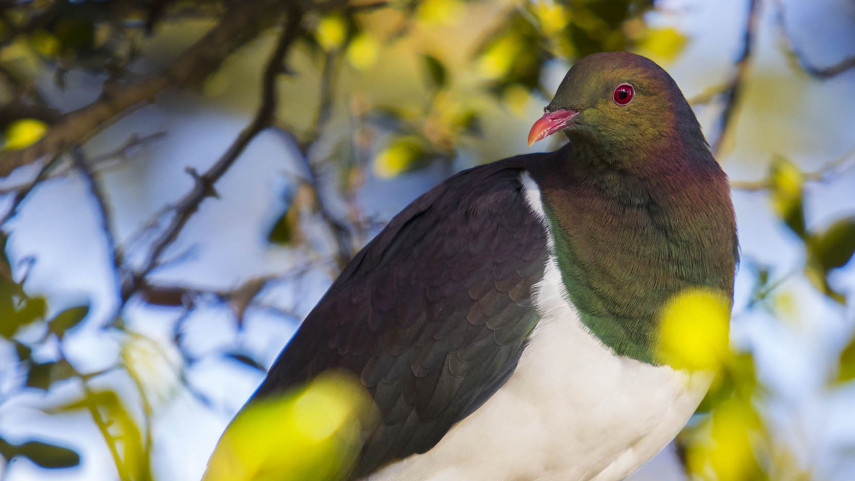 Eyes up Christchurch – the distinctive noise and striking colours of the kererū, New Zealand wood pigeon, will be a common sight around the city over the next few weeks.

The stunning birds are currently forging a flight path across the city foraging for late autumn, early winter meals in gardens and parks.

The birds, which usually spend their time in the city near the Botanic Gardens and Riccarton Bush, have now been spotted as far away as Abberley Park in St Albans, beginning their winter wanderings.

A kererū perches on a branch in Abberley Park, St Albans.

Christchurch City Council bird and wildlife expert Andrew Crossland said the kererū were flying between Ilam and Richmond at this time of year, feeding on suburban gardens and parks.

“Our parks become stepping stones for the kererū and other native birds to fly between, turning the city into a large open woodland that provides important feeding resources in autumn and winter.”

The kererū is a distinctive bird with iridescent green and bronze feathers on its head and a smart white vest. The noisy beat of its wings is a distinctive sound in our forests and gardens.

The birds are vital to the survival of New Zealand forests, because they’re one of the only birds left (all others are now extinct) big enough to swallow large fruits of native trees. After dining on the fruit, they fly to their favourite roost to digest their meal. When they eventually pass that meal, they leave behind a dropping containing a seed. This helps seedlings establish in new areas, and keeps forests rejuvenated.

Known as “propagators”, the kererū are a “keystone species” of lowland forests.

“If the conditions are right, we know kererū can expect to live for 20 years or more but currently, they survive on average around five years,” Mr Crossland said. “The breeding population, especially in the Port Hills, increased from 30ish to 95ish over the mid-1990s to the mid-2000s and may be higher now. In Christchurch city the Botanic Gardens has held its own for decades and the expansion in range over the last decade (to Southshore, the lower Styx River, inner northern suburbs from Ilam in the west to Richmond and Avonside in the west is indicative of an expanding population, not a decrease. Community groups, Councils and the Department of Conservation are all working hard to increase kererū numbers.”