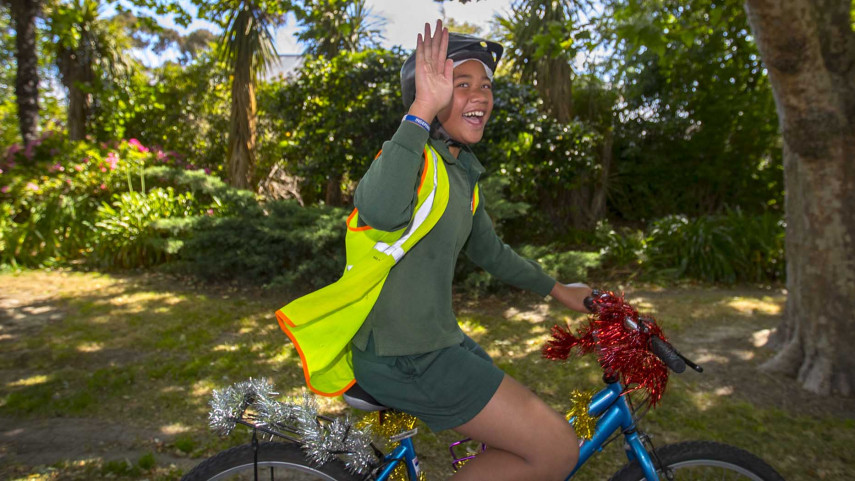 Linwood Avenue School students pedalled their way into the history books on Wednesday when they became the first to ride on the Rapanui-Shag Rock cycleway.

The first stage of the cycleway was officially opened this morning.

It takes cyclists from Linwood Park, through Linwood, into the city centre – a journey of about 2.5 kilometres. Eventually the cycleway will stretch as far east as the Ferrymead bridge, where it will link to the Christchurch Coastal Pathway.

For the Linwood Avenue School students today’s official opening provided a chance to not only try out the new cycleway, but also a new bike.

Some of the bikes the school used for cycle safety training were stolen earlier this year so a few Christchurch City Council staff donated their old bikes to ICEcycles to repair.  ICEcycles have already repaired one and gifted it to one of the students for Christmas.

“It’s fantastic to see the kids on their bikes and enjoying the new cycleway,’’ says Cr Pauline Cotter, who chairs the Council’s Infrastructure, Transport and Environment Committee.

“The new cycleway routes are about making it safer for kids and people of all ages to cycle so we become less reliant on cars and lead healthier, active lives. Hopefully some of the kids using the cycleway today will become regular uses of this cycleway,’’ says Cr Cotter, who officially opened the cycleway this morning along with Associate Transport Minister Julie Anne Genter.

Today’s opening of the first stage of the Rapanui-Shag Rock cycleway comes as a new survey shows the Council’s investment in major cycleway routes is paying dividends.

The Council is building 13 major cycleway routes across Christchurch to connect communities and to make it safer for people to cycle.

Three routes – the Papanui Parallel, the Little River Link and the Uni-Cycle – are completed or substantially completed. The remaining 10 are in various stages of planning and implementation.

In late October and early November the Council surveyed 625 cyclists who were using the completed routes to gauge their thoughts on the cycleways.

Ninety-four per cent of people who answered the survey said they thought the new physically separated cycleways had improved their safety and cycling comfort.

Eighty-three per cent stated the new separated cycleways had played a role in encouraging them to make more trips by cycle.

Ninety-two per cent of people surveyed said they either strongly agreed or agreed that physically separated cycleways should be installed on routes throughout Christchurch.

The Infrastructure, Transport and Environment Committee will consider the survey findings when they meet later today.