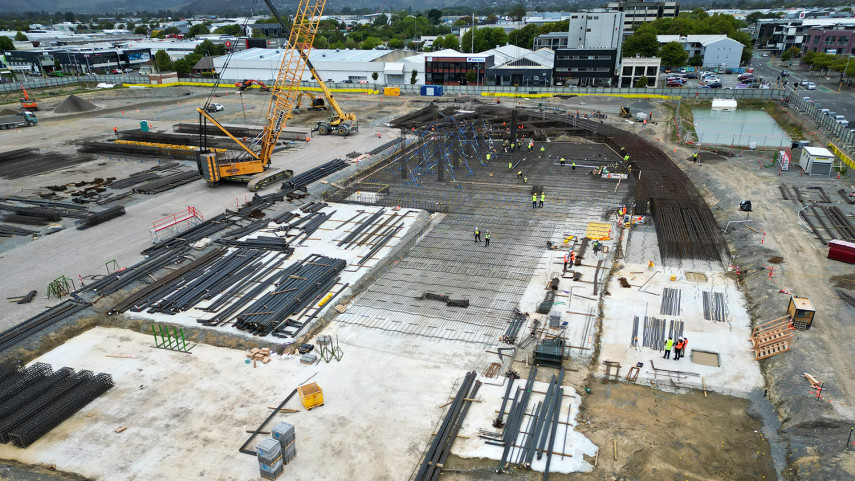 Work on Te Kaha, Canterbury’s Multi-Use Arena, will hit a new milestone later this month when the first of the foundations’ major concrete pours is completed.

“These concrete pours are significant as they signal the start of the main construction of Te Kaha,” says Mr Kennedy.

“The substructure is a crucial element as it will enable the land to support the huge 30,000-seat arena, and ensure it can withstand any seismic activity in the future.

“Most of the concrete pours are likely to begin at about 2am. This will help minimise heat stress on staff and minimise the risk of traffic congestion during peak morning periods, ensure consistent concrete supply and keep the concrete cooler.”

Mr Kennedy says that concrete pouring can generate noise due to the movement of vehicles and the use of pumps, but the contractors will put measures in place to minimise noise.

“To help minimise the noise for nearby residents and businesses, contractors will set up during daylight hours, locate the equipment and machinery in the middle of the site so they are as far from neighbours as possible, use quieter equipment and minimise activities that create noise.

Nosie barriers will also be used where practical, and subcontractors will undertake additional training.

The concrete pours will begin on the Madras Street side of the site, establishing the foundations for the western stand.

The pours will then follow the ground improvement early work that is continuing across the site, finishing with the northern and eastern stands later this year.

Once completed in April 2026, the state-of-the-art multi-use arena will have a seating capacity of 30,000 for sports events and will hold a minimum 36,000 spectators for large music events.

Te Kaha will add to the central city’s vitality, catalyse further development, help re-establish Christchurch as a sporting and cultural capital and boost the city’s economy by attracting visitors from around New Zealand and the world.

For more information on the project, visit canterburyarena.co.nz

You can read the Start Works Notice for the concrete pours here.