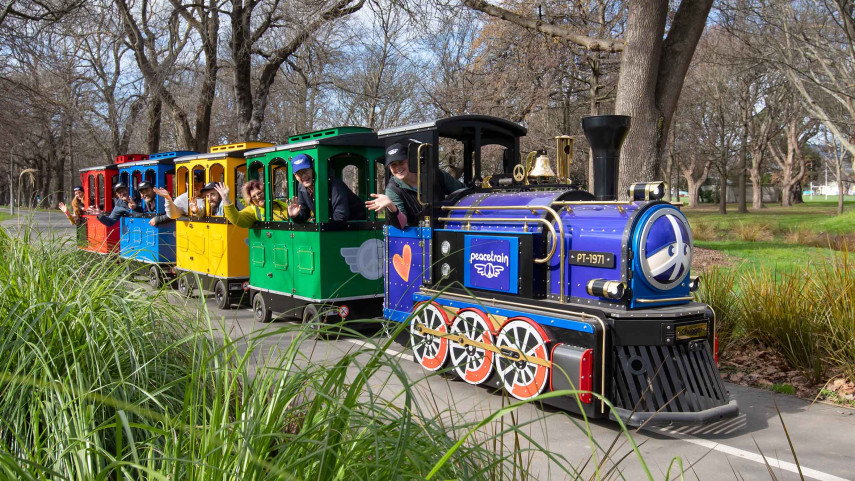 When the call went out for volunteers to run the Peace Train that Yusuf Islam gifted to Christchurch after the mosque attacks, Andrew Wilson knew he had to put his hand up.

Yusuf Islam (previously known as Cat Stevens) gifted the miniature train to Christchurch after the 2019 mosque attacks on the condition it would run in a central location and that the rides would be free for the citizens of Christchurch.

The electric battery powered train will be based in South Hagley Park and will run from 10am to 4pm on the first and third Sunday of each month, apart from June, July and August.

The train will run on the pathway around South Hagley Park.

The 13-metre long train can carry about 16 people and is wheelchair accessible.

One of his workmates was at the mosque when the attacks occurred and witnessed the shootings.

“He rang me as he was due back to work on a project with me, saying there had been an event,’’ Andrew recalls. “It rocked me to the core – my peace-loving friend had been through such an ordeal. It took a long time for him to recover. He lost his best friend and flatmate.’’

Andrew did all that he could to support his workmate in the months that followed.

When he heard the Council was looking for volunteers to help run the Peace Train, the 55-year-old saw another way to show his support so he volunteered to train the train drivers.

“I have been involved with trains since my earliest memories,’’ says Andrew.  “I have been known, accused even, of being obsessed with them. It’s not too far from the truth.’’

He collects model trains, has a huge garden railway in his backyard, and is railway manager at Steam Scene McLeans Island. He is also involved with the Little River Railway Station Trust and a member of miniature railway at Halswell.

As a grandad, Andrew says he loves putting a smile on kids’ faces and sharing his passion for trains with others. His years of experience with trains means that he knows exactly what it takes to be a good train driver.

“Reasonable fitness, good health, a keen eye, a happy disposition and a willingness to make someone’s day,’’ he says.

Andrew is part of a team of 40 volunteers who will be helping to run the Peace Train.

Co-ordinating the volunteers is Brendon Eason. His wife, Elizabeth, has also volunteered to be a driver and conductor.

“My wife and I saw the article on Stuff [about the Council seeking volunteers] and thought it was awesome. What a wonderful idea to promote unity and peace through families in Christchurch. This is what we believe in and what we support,’’ says Brendon.

“We want to bring smiles to faces and joy to people’s hearts. Even on our training run we had a group of older people taking photos and their faces told the story – they were smiling and laughing and they all wanted a ride.’’

Brendon says the Peace Train is an amazing gift to the people of Christchurch and he cannot wait to take people for a ride on it.

The Peace Train will have its first public run on Sunday, 4 September. More details about the inaugural run will be released nearer the time.