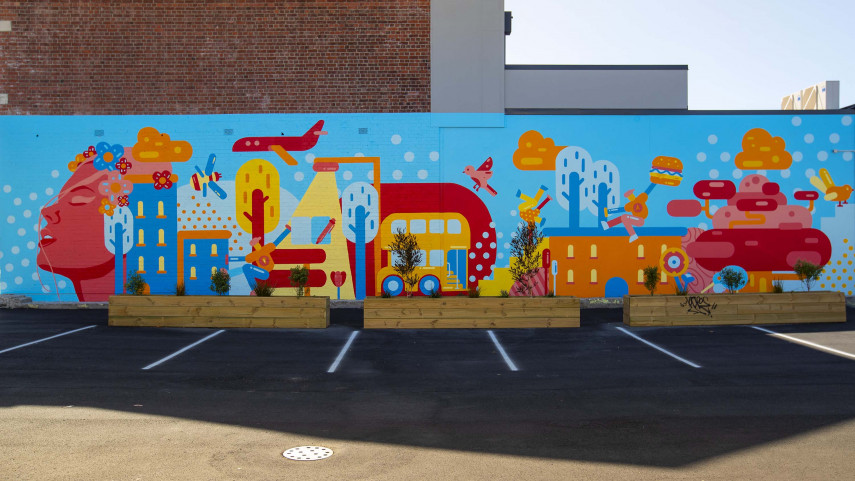 Titled ‘Cassandra’s Dream’, it shows a bright, new Christchurch as seen through the eyes of a local explorer. The design, set against a bold, blue background, depicts a woman’s face in profile and a cityscape highlighting the mix of activities and features in the Central City South area, including food, innovation and creativity, heritage buildings and transport.

Box112, which developed The Welder Collective, approached the Council last year with the idea of creating a mural to enliven the new laneway between St Asaph and Welles Street.

The company was keen to get Yoobee students involved in the new mural to showcase their talent.

Student Phillipa Suckling says it has been an enjoyable experience since the group began planning the design last October. A detail from the mural 'Cassandra's Dream'.

“We’ve all learned a lot about the design process and how that translates to real life. Everyone has found it really valuable and it’s been good exposure for us as we move into the workforce.

“The mural is something to be really proud of. We wanted to brighten up the area and make it a nicer, happier place and I think our design has achieved that."

Signwriter Paul Walters, who owns Identity Signs, mentored the students and helped them with some of the technical skills involved, including cutting lines, mixing paint and ensuring colours complement each other.

“It’s their artwork and their vision and they’re very enthusiastic, I just stepped in to show them how large-scale murals are painted."

Mr Walters hopes to work more closely with Yoobee to educate students about signwriting as a potential career through a recently developed signwriting training programme, Signee NZ, of which he is Director. The New Zealand Sign and Display Association is leading this initiative.

Council Head of Urban Design, Regeneration and Heritage Carolyn Ingles says the mural project has helped up-skill the students and given them valuable work experience.

“What they’ve come up with is a vibrant, fun reflection of the local area. The Enliven Places Programme aims to encourage engagement with the community and this project shows how worthwhile that can be for everyone involved.”