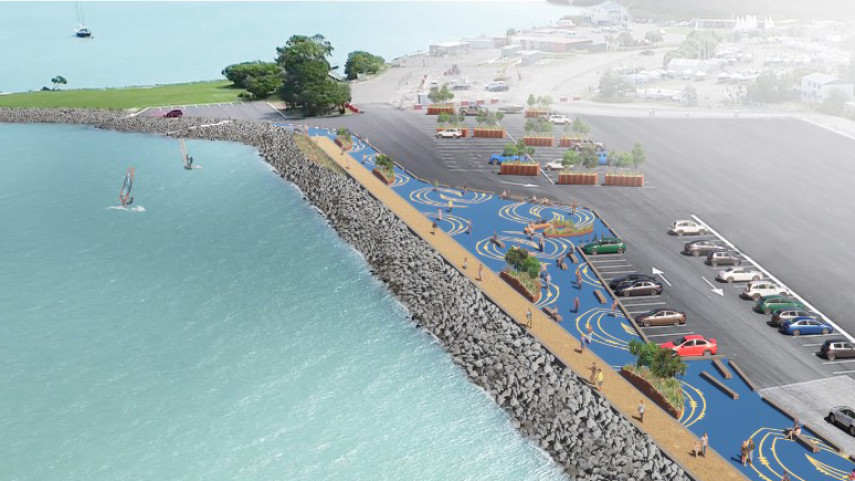 These further improvements will be considered by Te Pātaka o Rākaihautū-Banks Peninsula Community Board when it meets on 12 September.

Read the reports for the Community Board.

Improvement works has been under way at Naval Point since a development plan for the area was signed off in November 2020. Work done to date includes the sealing of a large section of the car park, rock revetment improvement and upgrading of utilities.

“The upgrade includes creating a waterfront walkway area that will be painted with designs that Te Hapū o Ngāti Wheke Rāpaki have developed to reflect the area’s history and value to mana whenua,’’ Mr Rutledge says.

A series of seats are also proposed for the waterfront area, as well as planters to be located along the walkway and within the parking lot. These will also incorporate the cultural designs.

If approved, the work will be carried out before Naval Point hosts its inaugural SailGP event in March 2023, during which sailing teams from around the world will race on Whakaraupō Lyttelton Harbour.

“The paintings on the walkway area will remain for the event to showcase the site’s unique cultural significance as the sailing is broadcast globally to an audience of over 50 million. The proposed planter boxes, site furniture and public seating area have been designed to be relocatable so they can be moved if needed while the event is under way,” says Mr Rutledge.

Material for the project, including reused wharf timbers, have been donated by the Lyttelton Port Company to be used by Te Hapū o Ngāti Wheke Rāpaki carvers on port land at Naval Point.

A number of found and donated items that are significant to the site have also been identified and will be part of wider interpretation works linking the cultural and heritage setting of Tapoa-Naval Point with the harbour.

The improvements to Godley Quay will see a full upgrade of the road, including resurfacing, better lighting and utilities, and construction of a shared pedestrian and bicycle path on the western side of the road. This is planned to be completed before the SailGP event.

“This project will align with other recent pedestrian improvements in the area, including the upgrade at Godley Quay and Voelas Road which links to Te Ana Marina, and the connection from Te Ana Marina into the Lyttelton township.”

No stopping restrictions are proposed for Godley Quay, to take effect when signs and road markings are in place following the road upgrade works.