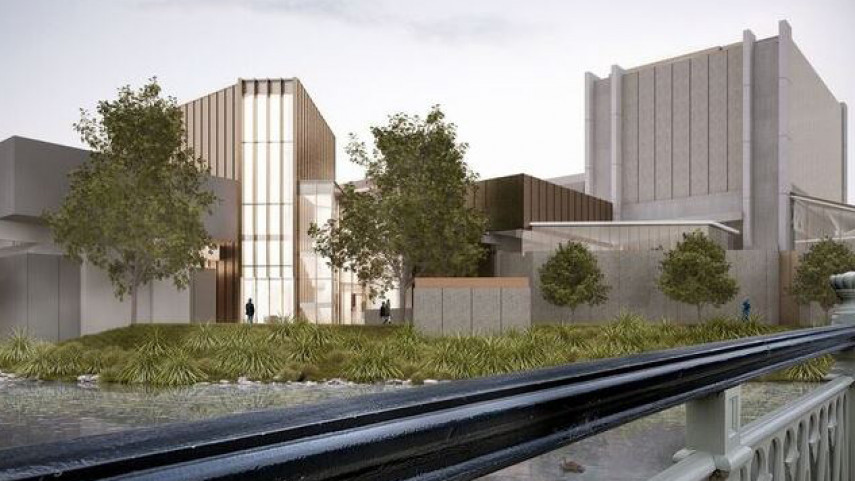 The architectural firm that designed the Town Hall has released drawings of the new addition that will provide a home for the Christchurch Symphony Orchestra (CSO).

The new Warren and Mahoney designed addition replaces the Cambridge Room, which was demolished as part of the repair and strengthening of the Town Hall. An artist's impression of the Town Hall with the new addition for the Christchurch Symphony Orchestra.

The new three-storey building will connect into all levels of the Town Hall and provide views across the Avon River to Victoria Square.  As well as rehearsal and office space for the CSO, it includes offices for Vbase, the venue management company that operates the Town Hall, and public toilets.

“As part of the strengthening and repair of the Christchurch Town Hall we have located the CSO administration, operations and rehearsal facilities within the complex,’’ says Warren and Mahoney principal Peter Marshall.

“This is one of the most significant aspects of the project and takes the Town Hall into a new realm where performers are based within the performance venue, bringing further life and vitality to the building.’’

CSO Chief Executive Gretchen La Roche says the orchestra is really looking forward to being in the heart of the city.

“It’s exciting for us to be the first arts organisation resident in the Town Hall of the Performing Arts and we’re eager to play our part towards ensuring that the Town Hall is a vibrant, alive and welcoming space for the people of Christchurch.

“The stability that our new home will provide the CSO will also enable us to significantly expand our Community Engagement Programme. This is a priority for the orchestra as we’re currently unable to meet the demand and are keen to share musical experiences with as many people as possible,’’ Ms La Roche says.

Work on the restoration of the Town Hall began in June 2015. The initial budget for the project was $127.5 million but it has since been revised to $152.2 million.

The new budget takes into account inflationary costs and the additional expenses associated with bringing the building up to a modern standard and building the new CSO facility, which is a significant change in scope.

It also includes a significant contingency. The size of the contingency is not being released for commercial reasons. Restoration of the Town Hall Auditorium is nearing completion.

Mary Richardson, the Council’s General Manager Citizens and Community, says the cost of repairing and restoring the Town Hall compares favourably with the cost of building a brand new facility.

“If we had gone with the option outlined in the Christchurch Central Recovery Plan of building a new 1500 seat auditorium and 600 seat theatre on a new site we would have needed to spend in excess of $193.5 million,’’ Ms Richardson says.

“For significantly less, we have been able to restore a treasured heritage building and upgrade it to a modern standard so that it can be used for decades to come as premier performance venue.

Councillor Tim Scandrett, Chair of Vbase, which owns and manages the Town Hall on behalf of the Council, says the reopening is planned for March 2019.

“We’re taking bookings and can’t wait to reopen the doors to the public again,'' he says.