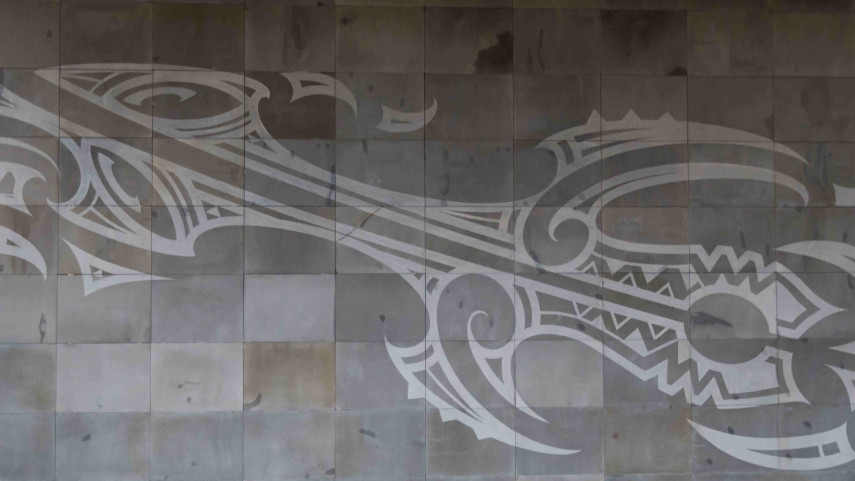 Migration stories and the currents that bring people to new countries feature in a large-scale artwork adorning the new central library.

Local Māori artists Morgan Mathews-Hale and Riki Manuel have collaborated on the design which has been painstakingly sand blasted by hand at local studio Art Fetiche Studio into bluestone tiles that make up a 38-metre outer wall of Tūranga.

The new library, which is on the corner of Cathedral Square and Gloucester St, has a floorspace of nearly 10,000 metres and is due to open later this year.

Ms Mathews-Hale says she and Mr Manuel took their inspiration from a waiata called E Tuku Ana which describes Ngāi Tahu and Ngāti Porou whakapapa and the voyaging of ancestors from Hawaiki in the Pacific to Te Waipounamu (the South Island).

The design captures a view from above of Polynesian ancestor Paikea riding on the back of a whale (or taniwha), with the whale’s eyes, fins, and tail visible along with swirls of turbulent water and jagged shapes that symbolise challenges and obstacles that people encounter on their voyages. It also depicts the connections between generations.

"It’s a building where we all go to find knowledge and that’s what this (artwork) should reflect on."

The pair say they hope the design will be universal because everyone has their own genealogy and the artwork encompasses many migration stories.
“It’s about storytelling and movement,” Mr Manuel says. “The stories never end and the currents are still moving.”

His extensive experience in traditional Maori carving and 28-year-old Ms Mathews-Hale’s digital and visual design skills came together in the project which has complex architectural requirements.

Seeing the work on the wall of such a huge building is “pretty overwhelming” Ms Mathews-Hale admits. “I have been waiting for my chance to collaborate with Riki, he's always been an influence of my work. I'm honoured that we were able to secure the opportunity to work on such a large scale, high profile piece together."

Mr Manuel, who has lived in Christchurch for nearly all his life, says it is a good feeling to have an artwork in the centre of the city as a kind of legacy. He hopes it will be meaningful to all visitors to the library building.

“I think we have to think about what the building stands for. It’s a building where we all go to find knowledge and that’s what this (artwork) should reflect on. This is the way that stories travelled at one time.”

Head of Libraries and Information Carolyn Robertson says Tūranga, which will have a hands-on technology and innovation zone, an arts and crafts space, music studio and a children's playground, will be a cultural hub for Christchurch and an important civic space that attracts people back into the central city.

"As the flagship of the city’s libraries network, it will retain the largest print collection while showcasing and celebrating Christchurch and Canterbury heritage and taonga."