The new library and knowledge centre is under construction on the corner of Colombo and Gloucester streets and is one of the anchor projects provided for in the Government’s blueprint and is being led by the Council. Construction has begun on the new central library and knowledge centre.

The Cost Sharing Agreement the Council and the Government signed in 2013 estimated the total cost of the library at $89.93 million, but it now looks likely the total cost will be about $95 million.

That cost has already been factored into the Council’s budgets.

Originally $70 million was tagged for the design and construction of the new library and knowledge centre but after consulting with the public as part of the 2013/16 Three Year Plan process, Council agreed to put another $15 million into the project, bringing the total design and build costs to $85 million.

Some $10 million of the $85 million was meant to have been sourced by the Crown from philanthropic donations, but the Crown abandoned this approach, effectively passing responsibility onto Council.

Council is exploring some exciting options in this space and hopes to make some announcements shortly.

In February last year Council approved an additional $2.2 million to cover the cost of decontaminating the land.  In April Council approved another $5.5 million to essentially reimburse the Crown for the money it paid the Council for the old Gloucester St library site, which has been earmarked for the Convention centre.  This effectively created a land swap, although the Crown did not reimburse the cost of decontaminating the site.

In its Long Term Plan the Council has provisionally set aside another $2.3 million to cover inflationary costs, which it is legally required to do for a capital project the size and scale of the new library and knowledge centre.

“There have been reports in the media that the cost of the new library and knowledge centre have risen by more than a half and that is simply not the case. The total cost won’t be far out from what was estimated in the Cost Sharing Agreement,’’ Mr Adamson said.

“What has changed since that agreement was signed is who pays for what. The Crown has made its contribution through purchasing the original properties on the site and paying for their demolition.''

Mr Adamson said while Council was funding the full capital cost of the project, it was still pursuing partnering opportunities.

"This centre will be at the forefront of new thinking, technology and experience, including online resources, embracing social media and allowing for collaboration. It is very much the way of the future,'' Mr Adamson said. 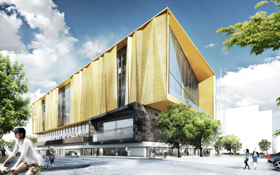 An artist's impression of the new central library and knowledge centre.